SWITZERLAND is in central Europe, and shares a border with France, Germany, Austria and Italy.

Doctor Who did not screen on any local Swiss television stations, but viewers could see the programme by tuning into transmissions from neighbouring countries such as Italy, France, and Germany.

DOCTOR WHO IN SWITZERLAND 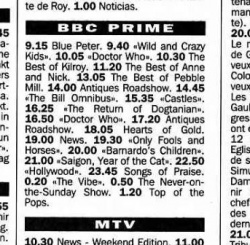 In a BBC memo dated 7 July 1965, Switzerland was one of several European countries to which the series had been offered. The stories on offer were The Daleks, The Sensorites and The Dalek Invasion of Earth (tellingly, it was three 'futuristic' stories and no historicals!).

However, the offer was not accepted and no sale eventuated. (Of note, the same three stories were also offered to Sweden and Finland, suggesting some kind of proposed 'European region deal'.)

The first Peter Cushing Dalek movie, "Dr Who and the Daleks" screened at the Nord Sud cinema in Geneva in August 1968. This was part of a "Festival du Fantastique" exhibition, and was in English.

In the late 1980s and 1990s, British satellite stations such as Super Channel and BBC Prime, both of which aired Doctor Who (see Cable and Satellite), were available.

The Paul McGann TV Movie was shown on the Luxembourg channel RTL9 in 1999 and 2000; this channel was available also in Switzerland.

The DVDs and Blu-rays published in Germany by Pandastorm/Polyband are also licensed for distribution in Switzerland through Impulse Home Entertainment. 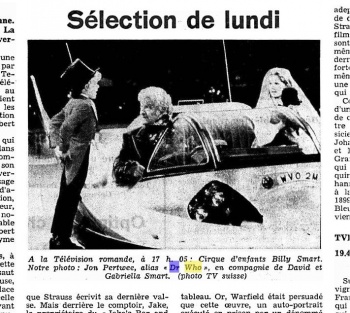 The circus special, "Billy Smart's Children's Circus", featuring Jon Pertwee in the Whomobile (which had aired on BBC1 on 6 January 1974), was shown on the French-language Télévision Suisse Romande (TVR) station on Monday, 7 January 1974.

Switzerland in Doctor Who