The SCI-FI CHANNEL's UK and Europe service (aka Sci-Fi Channel Europe, and now just SYFY), is the sister station to the US cable / satellite platform. It was launched on 1 November 1995, and was available in the UK and Ireland, and to much of Europe (the Benelux countries Belgium, Netherlands and Luxembourg) and Scandinavia.

Like its US counterpart, the channel specialised in science fiction, fantasy, horror, supernatural, paranormal, drama, and reality programming, but mainly US product. The only BBC series it acquired at the time was The Tripods, but other BBC series, such as Doctor Who, were acquired much later. (Initially, Sci-Fi Channel didn't want to compete with UK Gold, which at that time was the home to Doctor Who.)

The cable feed was available 24/7 in the UK and Europe, but since the Astra was used by Sky, the satellite feed (on Astra channel 47, and on Sky channels 130, later 129) was only available from 1am to 4am on weekdays, and from 7pm to 10pm on Mondays, Tuesdays and Wednesdays. The other days and timeslots were reserved for alternative programming. 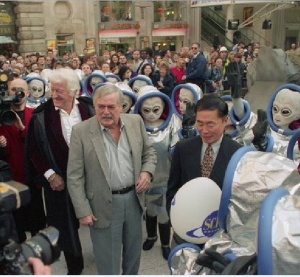 The official launch party was held at London's Waterloo Station on 31 October 1995. Although Doctor Who was not part of the channel's line-up, Jon Pertwee was on hand, along with Star Trek's James Doohan and George Takei (and later Brian ("Gordon's aliiiiive?!") Blessed, who, he says, happened to be passing!).

A series of short interviews with Jon Pertwee, Sophie Aldred and Terrance Dicks were later recorded by director Kevin Davies for the channel, but it's not clear when or how they were used, since Doctor Who wasn't shown, and the three had no involvement with any of the stories that were subsequently shown 13 years later!

By the end of 1996, the service was also available in Southern Africa.

In October 1998, with the channel under new management, it was rebranded as Sci-Fi with a new 'half rings of Saturn' logo.

From January 1999, the channel ceased its feed to Scandinavia and Benelux. 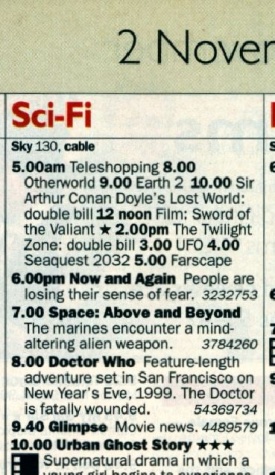 Radio Times listing for the TV Movie on 2 November 2002

Seven years after its launch, the channel finally acquired and screened Doctor Who, but only one story - the 1996 TV Movie.

Six years later, the station purchased a small package of selected Doctor Who serials featuring the fourth, fifth and sixth Doctors, all in the omnibus "movie" format: 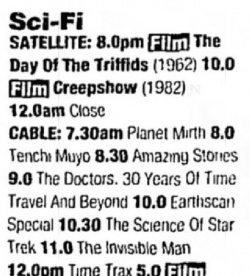 Some of the first Doctor Who-related content screened by the Sci-Fi Channel was from BBV Productions. The documentary "The Doctors - 30 Years of Time Travel and Beyond" was screened for the first time on Monday, 20 May 1996, at 9pm. It was repeated on 29 May 1996, the same week that the TV Movie was first shown on the BBC. (The documentary - sometimes cut down into 20 minute segments and aired as late night filler - would be shown more than 20 times by the channel between 1996 and March 1999.)

Sci-Fi attended the BAFTA preview screening of the TV Movie in London on 14 May, and recorded interview material, which it screened under the title "The Making of Doctor Who - The Movie", which aired for the first time during the regular Sci-Fi Buzz programme on Saturday, 25 May 1996 at midday. (The 20 minute short would be screened another dozen times during the year; the last showing was on 23 November 1996, the series' anniversary.)

The following year, the channel had meetings with the BBC regarding a co-production project to make new versions of the missing episodes - a series to be called "Doctor Who Resurrection"; ultimately, this idea was not taken further.

In mid-1998, Sci-Fi filmed and aired "The Making of Auton 2" for its late night "SF Scene" news programme. The BBV Productions' drama "Devil of Winterborne" was also apparently shown circa late 1998, but we have not been able to verify this.

The TV Movie itself aired for the first time on Saturday, 2 November 2002 at 8pm. It was repeated the following day at 2pm - and was then shown nine more times (!) on various dates and timeslots over the next ten months between 26 December 2002 and 25 October 2003.

On 20 April 2003, the film was preceded by "Dalekmania", the one-hour direct-to-video documentary made in 1995, directed by Kevin Davies.

The first Peter Cushing Dalek film, Dr Who and the Daleks, was also shown, five times on various dates between 28 October 2006 and 24 December 2006. 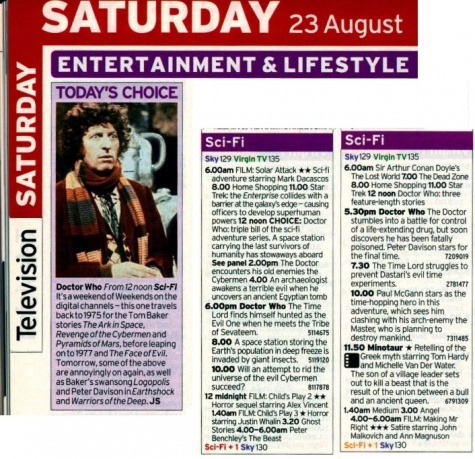 The package of nine omnibus serials plus the TV Movie (again!) was screened for the first time in 2008 over the August Bank Holiday weekend; Saturday, 23 August to Monday, 25 August 2008, in multi-story marathon sessions running from noon till midnight over the three days.

Some stories screened more than once over the weekend (which the Radio Times preview said was "annoying"), and sometimes twice the same day.

The same package - but this time without the TV Movie - was repeated two years later over Easter weekend 2010 (probably not a coincidence this was the same weekend as the new series debut of Matt Smith in The Eleventh Hour).

The run started on Friday, 2 April at 2pm. Four stories were shown. The next day, Saturday, 3 April, two of those were repeated with two 'new' stories, also starting at 2pm.

The marathons on Sunday, 4 April and Monday, 5 April 2010, both started at midday, enabling five stories to be shown - again some screened more than once across the two days, and some twice the same day.

In summary, across the two marathon runs, the early Tom Baker stories and Earthshock were shown four times each, while Logopolis was shown five times; Warriors of the Deep, The Caves of Androzani and The Two Doctors only three times. The TV Movie had 13 airings between 2002 and 2008.

(Starting from 17 August 2011, Doctor Who was shown on Sci-Fi's Australian service, starting with the Tom Baker era...)

Details come from the UK Radio Times, and the This Week in Doctor Who site.