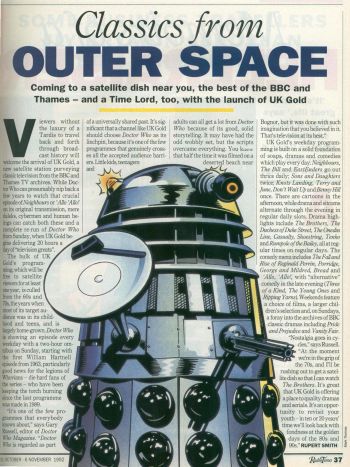 UK Gold, a British satellite channel specializing in repeats, was launched on 1 November 1992.

It aired Doctor Who from 2 November 1992 (starting with An Unearthly Child) to 14 April 2007 in episodic and omnibus editions.

When UK Gold screened The Mind of Evil in June 1993, they could be supplied only with an Omnibus edition and not the six episodes individually, so they re-cut the 'movie' into six parts, creating new and different cliffhanger endings - i.e. 'part 1' now concluded with Dr Summers' statement that Kettering had "drowned in the middle of a perfectly dry room..." - kssshhhh - ooo-wee-ooo...

All serials written by Terry Nation were initially skipped due to rights issues. But by late 1993, these negotiations had been resolved and all the missed Dalek / Nation stories were shown in bulk between November 1993 and January 1994.

In May 1996, the station aired special behind the scenes material as a preview to the new TV Movie. On 1 January 1997, it aired More Than 30 Years in the TARDIS in two halves.

From mid-2003, rights issues again prevented any Terry Nation scripts or Dalek stories from being shown - including The Five Doctors with its Dalek cameo.

From 22 - 23 November 2003, it ran a special Doctor Who @ 40 weekend, which featured omnibus editions of 'fan-favourites' selected by a poll, with new interviews with cast members, production personnel, and well-known fans. Also shown (on both days) was the 4-part spoof Doctor Who and the Curse of Fatal Death, which had previously aired on the BBC's Red Nose Day, 12 March 1999.

In July 2007, UK Gold dropped Doctor Who from its schedules, and the series was transferred to its sister channel, UKTV Drama.

The channel has since been renamed Gold, and is now part of the wider UKTV network.

A downloadable schedule of all UK Gold's Doctor Who airdates is available here: 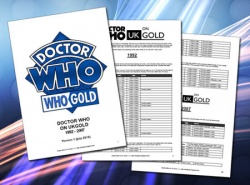