SOUTH AFRICA lies at the southern tip of the African continent.

Although an article in DWM issue 187 (June 1992) claimed that Doctor Who "went to countries that still broadcast black and white television services, such as South Africa", the series was never broadcast there - the country did not establish TV until the mid-1970s, and this was only ever a full colour PAL service (see below), so no black and white episodes would have been shown.

While it never made it to TV, Doctor Who was available in other ways.

DOCTOR WHO IN SOUTH AFRICA

It's likely that the two Peter Cushing Dalek movies were shown in cinemas throughout South Africa in the late 1960s.

Television was not introduced to South Africa until the late 1970s, when the government finally bowed to public pressure after years of banning television as being morally corrupting.

A PAL colour system television service was launched by the South African Broadcasting Corporation (SABC) on 5 May 1975 in some areas, with nationwide coverage from 6 January 1976; half the broadcasts were in English, half in Afrikaans.

Of note, the English content was mainly American product, as due to its opposition to Apartheid, UK Equity refused to allow sales of British programmes to the country. Doctor Who was therefore never shown.

There have been claims that British television programmes - including Doctor Who - may have been "smuggled" into the country from other African nations and shown illegally in order to circumvent the Equity boycott. It is impossible to verify if this was ever indeed the case.

But some residents living near the borders could potentially have seen Doctor Who via transmission signals coming from neighbouring countries. Of those with which a border was shared, only three aired Doctor Who - which may have been seen in isolated parts of South Africa: 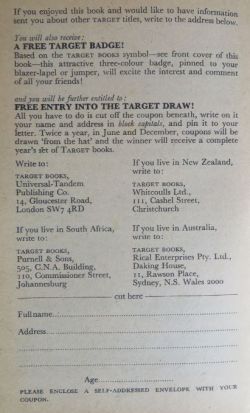 Although Doctor Who did not screen (at least officially), the Target novelisations were available in the early to mid-1970s and the late 1980s.

No pre-printed price for South Africa appears on the back covers, but on the final page of some of the Target paperbacks published in 1974, 1975, 1976 and 1977 was a list of addresses to which readers could write to go into the draw to win a set of books and receive a free Target badge; this included an address in South Africa:


A decade later, the run of Target Books published from late 1987 until mid-1988 (first edition and reprinted paperbacks, and the final seven hardbacks) had the addresses for the distributors printed on the back covers, including one in Bergville (Bergvlei):

This address also appeared on the back cover of the seven Star Books dual editions published from 1988 to 1989.

Although the "Classic" series was not shown, the New Series of Doctor Who was available in South Africa on BBC Prime / BBC Entertainment (South Africa) since late 2008. And from November 2018, it has been shown on the Free-to-Air web-based service TV2Go.

South Africa in Doctor Who