These pages offer an Overview of the screenings of Doctor Who in Australia, as detailed on the Airdates Tables (click on Navigation bar to access). The screenings have been divided into "Blocks", each representing "new" first-run episodes, usually but not always corresponding with each new 'season' of Doctor Who. In most cases each block of new episodes was preceded or followed – and sometimes interrupted – by a run of "Repeats". For the sake of simplicity, only the story codes are used.

This Overview and the Airdates tables are based upon published TV listings from the main city or cities within each of the eight regions. Some of the scheduled screenings would have been pre-empted due to last minute replacement, such as by coverage of local sporting events. Obviously, these are not going to be listed. Therefore, please treat this snap-shot overview more as "this is how it was to be" rather than "this was how it was, absolutely".

Australia has three standard time zones: during most of the year, PERTH is an hour and a half 'behind' ADELAIDE and DARWIN, and two hours 'behind' MELBOURNE, HOBART, CANBERRA, SYDNEY and BRISBANE. However PERTH, DARWIN and BRISBANE do not adopt "Daylight Savings" by adjusting the clocks by an hour during summer, and the other states that do recognise the change do not all do so at the same time! (For more on this, see HERE.)

In short, the variable time changes across the country meant that even though broadcasts of Doctor Who were scheduled to air all in the same early evening timeslot, the series actually aired in the west two or three hours after it had aired in the east.

During the 1960s and 1970s, on the infrequent occasion that the same episode of Doctor Who aired in the west on the same day as it did in the east, there is uncertainty as to the mechanism by which this was achieved in every instance. There were several 'dual' screening methods available and employed by the Australian TV networks. These include:

Programmes broadcast by the regional Country Stations (see list and sortable table below) were provided by way of relay from each capital city using high-quality transmission lines, which is why episodes could be broadcast on different stations simultaneously within each state. It was only in Queensland that episodes aired by two of the Country Stations were done so months after the lead transmission in Brisbane. (This delayed broadcast was probably done using the "record onto tape" method.) (Full synchronisation between the Queensland regional country stations was established a few years later.)

People living near the border of south Queensland and north New South Wales could also view broadcasts coming from the other region.

With the introduction of colour to the ABC in March 1975, the mass duplication of video tapes was far less costly than circulating film copies. But it wasn't until February 1978 that for the very first time, all stations in all regions screened the same episode of Doctor Who on the same day, and this was achieved through the bulk duplication from the master video tapes.

And although we note when the final regular screening of a particular serial occurred, it should be kept in mind that the same episode may have aired a few months later on a Country Station in QUEENSLAND.

In some cases, particularly when it came to cataloguing long runs of repeats, airdates have been extrapolated by finding the first and last airdate of a run of episodes, then filling in the dates in between. There is no absolute certainty than all episodes have been correctly allocated all the right dates, especially if serials aired out of their correct place in sequence.

There is more detail provided in these summaries for the William Hartnell and Patrick Troughton stories simply because many of those episodes are now missing. From 1972 onwards, there were far fewer regional variances, and therefore the same degree of coverage is not necessary.

The first run of Doctor Who commenced in January 1965. Episodes aired weekly on different days of the week in each region, at 7.30pm - a timeslot dictated by the "A" censorship classification applied to A, B, C, E, G, J, K and L. Once all the "A" rated episodes had played, the timeslot was subsequently brought forward to 6.30pm, starting with The Web Planet.

Off-screen images from The Aztecs, part two and part four

Nine off-screen photographs - two from part six and five from part seven of D, and one from parts two and four of F - were taken by a viewer during the broadcasts of those two serials. It is not known from which region these hail, but at a guess it was from the 1965/66 SYDNEY repeats, as those two aired together in one block. (ADELAIDE also repeated the same two serials, but in November 1966.)

What is fascinating about the image from part four is that in the broadcast episode this particular shot of Hartnell is a very quick cut-away to him within a long scene that consists of a series of two-shots of the Doctor and Cameca. Given the suddenness of the cut to the one shot, it is highly unlikely that the photographer had anticipated this, and instead was likely aiming to capture a two-shot, but at the moment the shutter button was pressed, the on-screen image changed for a matter of seconds, which resulted in the photographer capturing this 'rare' shot of the Doctor instead. 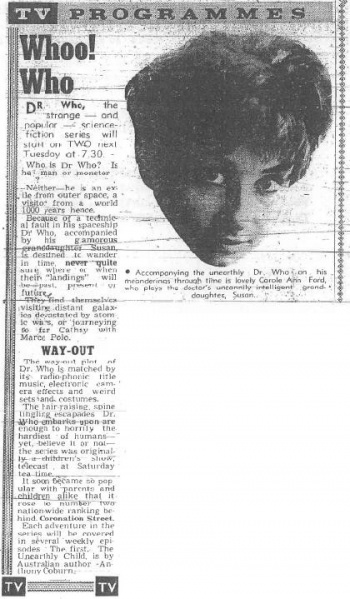 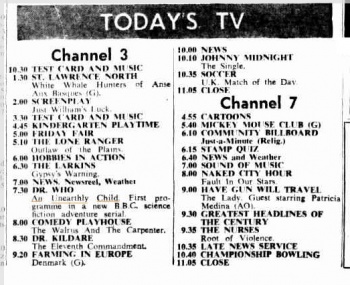 Episode 1 airs on the first of the "Country Stations", Canberra's channel 3 on 15 January 1965, via link with Sydney 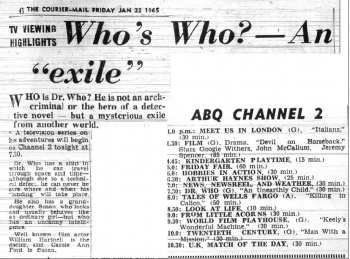 Billing, and Article previewing the first episode in Brisbane, 22 January 1965 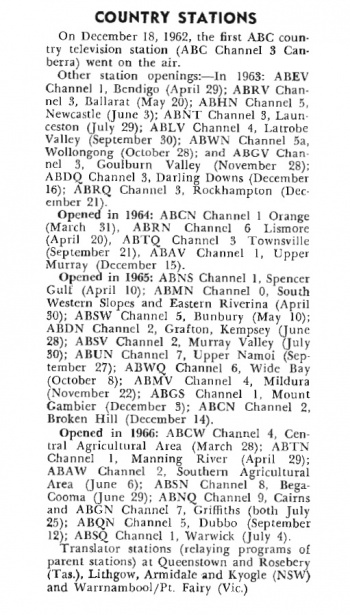 ABC's Country Stations; Australia TV Yearbook 1968. The staggered launch dates of the stations that opened in 1965 meant that viewers out in the country were introduced to Doctor Who well into the run, and often part way through a story!

As noted above, there were many inter- and intra-regional screening variances across the country. It would be impossible to catalogue every single one of these, but to illustrate the number of variances there could be just for one serial, here are the known main centre and country channel transmitters and airdates for An Unearthly Child, parts one to four:

As you can see, the country stations in Queensland were airing the first serial while other centres in the same state were seeing The Daleks.

Also of note is that a large number of new Country Stations went into operation at different stages throughout 1965 (see list above and right), widening the viewership of Doctor Who in its debut year; but of course that meant that many viewers tuned in for the first time mid-story!

This Block of stories was the first to be seen by the most number of viewers since the series started. As noted in the list above, by the middle of 1966, the number of Country Stations receiving feeds from their regional capital had nearly doubled the number that had been transmitting in 1965.

As a result of this, this Block of episodes is somewhat complex, due to the frequency of out-of-sequence screenings of the stories. This was most likely due to there being a minimum of only two sets of prints being circulated between the five regions, and it was therefore necessary to screen the stories out of order to avoid any overlaps.

NOTE ABOUT REPEATS: Serials A, B, C, E, G, K and L had all been rated "A" and therefore could not be repeated in the early afternoon slots. In July 1967, the ABC's prints of H, J, K and L (still exhibiting the censor cuts) were sent to New Zealand…

An Australian viewer filmed a number of short clips of Doctor Who by pointing a 8mm silent film camera at his television screen. The extracts were most likely taken in SYDNEY during the October to November 1966 first run of Q, R, S, T, and U, and the repeats of H, J and N, during November and December 1966.