Saskatchewan was the only province to play a brief run of repeats after the first 26 episodes had concluded on Friday, 2 July 1965. (A full list of the Saskatchewan stations is tabulated on the main CBC page.)

The two leading newspapers of Saskatchewan for that era are the Saskatoon Star-Phoenix and the Regina Leader-Post. Both newspapers agree that about nine Doctor Who episodes were broadcast by privately-owned station CFQC Saskatoon on weekdays over a two week period from Monday, 5 July 1965 to Friday, 16 July 1965 (no episode aired on the Thursday of the second week). As CFQC had already aired all 26 episodes purchased by the CBC by 2 July 1965, the station must have shown repeats. Unfortunately, what episodes were repeated is not known.

(Given that only nine episodes appear to have aired, and that it's unlikely the repeats would have been dropped midway through a serial, it could only have been one of the two 7-parters -- The Daleks or Marco Polo -- partnered with Inside the Spaceship.)

As the CBC did not own any stations in Saskatchewan in 1965 it is not clear which CBC station supplied the material. The most likely source is station CBWT Winnipeg, possibly using kinescope films returned to Winnipeg base from station CBWBT Flin Flon. CBWT Winnipeg was the Prairies Regional Headquarters for the CBC and was a distribution point for content throughout the Canadian Prairies.

The following airdates are those for privately-owned station CFQC Saskatoon in 1965: 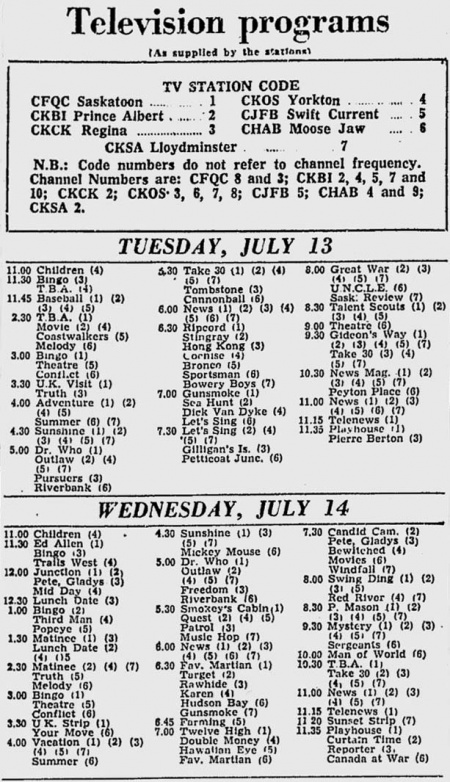 After the brief run of repeats in Saskatchewan, the prints would have been returned to the CBC.

Depending on whether these were acquired from the kinescope bicycle network or were the original BBC film recordings sent over from Toronto, and whether or not they were cut with timing edits, these prints were either destroyed, or were sent to another foreign broadcaster.

A likely candidate for receiving the ex-CBC prints is Trinidad & Tobago, which was the first country in the Caribbean to air the series, and commenced the run a few months later in October 1965. (Trinidad TV used Television International Enterprises Ltd as its programme purchasing agent; CBC Toronto may have sent the prints to TIE's office in New York rather than to the broadcaster directly.)

An alternative is that the 26 prints went from Toronto to the island of Bermuda, which was one of just three countries to have only screened those same five Hartnell serials; the series commenced airing there in December 1965.

Based on newspaper listings from the Saskatoon Star-Phoenix and the Regina Leader-Post it is possible that other Saskatchewan stations may have aired repeats, such as station CKBI Prince Albert. More corroborating newspaper sources are required with the search expanded to review newspaper listings for the smaller centers such as Prince Albert, Swift Current, Yorkton, etc.

The issue of episode repeats for Doctor Who raises some interesting questions. If the CBC offered repeat broadcasts to station CFQC Saskatoon, could the CBC have also offered these same episodes to other stations as syndication programming?

Most of the research involving Doctor Who listings in Canada has focused on the first eight months of 1965 and research for later years has mainly focused on the major newspapers for the larger cities. To find further listings for Doctor Who beyond 1965 would require an exhaustive search of 25 to 30 newspapers with listings for the private CBC affiliates covering the smaller cities right up until perhaps 1970. This will be a much larger task than the current eight month window in 1965 covered in the current work.

There are some hints that other Doctor Who repeats may have occurred. In the late 1990s, Bob Furnell located a small index card at CBC Vancouver in British Columbia that indicates that at one point all 26 episodes of Doctor Who were held there. But in 1965 most of British Columbia had a microwave relay link and only two TV stations required film prints to air the series -- CKPG Prince George and CFTK Terrace. It is very possible some episodes were held in Vancouver in 1965. Kinescope films returning from Flin Flon, Manitoba would be forwarded to British Columbia (likely via Vancouver) to be broadcast by CKPG Prince George and CFTK Terrace.

The issue is that CKPG Prince George transmitted only the first three episodes via kinescope prior to it receiving a microwave relay connection, and CFTK Terrace broadcast only the first 10 episodes via kinescope before it dropped the series completely. As such, British Columbia would need to receive only the first 10 episodes as film prints (Serial A and most of B) and not all 26 episodes purchased by the CBC. If CBC Vancouver did receive all 26 prints at some point as the index card might suggest, then it is possible that some stations in British Columbia were airing Doctor Who repeats in later years.

As Doctor Who repeats occurred in Saskatchewan and possibly in British Columbia, then it could have occurred at other stations across Canada. If so, it would appear that the work to discover all William Hartnell air dates in Canada remains still very much a work-in-progress…