CANADA is of the North American continent, and shares its borders with the United States.

Canada has a number of major television networks providing broadcasts across the country. The country is also served by broadcasts from several hundred small privately-owned commercial stations across all the Provinces.

During its regular runs on Canadian television, Doctor Who was screened by these known broadcasters:

After an eleven year gap, Doctor Who returned, screening simultaneously on (at least these) three channels:

When TVO lost its licence, the series was picked up by:

The one-off TV Movie debuted on:

The final stations to screen the series were:

Of course, for many Canadians, another primary source of Doctor Who were PBS broadcasts from the US states that bordered with Canada. For instance, WTVS in Detroit, Michigan could be viewed in Saskatchewan, Manitoba, and many parts of southern Ontario; and KSPS in Spokane, Washington, was available in southern British Columbia and Alberta. The many PBS stations operating out of the northern regions of New York state were also available in southern Ontario and Quebec.

DOCTOR WHO IN CANADA

Canada was the third country to screen Doctor Who (see Selling Doctor Who). On 9 December 1964, a 16mm film print of the first episode was evaluated by technical quality advisers.

The first Aaru movie played in theatres across Canada. The initial release dates are not known, but the film was played in provincial theatres in the late 1960s. In April 1969 the film played at the Chateau in Pine Falls, Manitoba.

The films also screened several times on television - see the sections on CKVU, YTV and SPACE.

The Stanmark Productions Ltd advertisement from 1966, identifies Canada as one of sixteen countries screening Doctor Who by January 1966.

Canada is not included in the list of 27 countries in The Making of Doctor Who (1972 Piccolo edition).

The Seventies records a sale of "(6)" stories by 28 February 1977. The Handbook identifies five of these to be: A, B, C, D and E. The sixth story is the Pertwee serial UUU.

As far as we can determine, this total is made up of the 14 Pertwees that aired on CKVU and TVO, plus 37 Tom Baker and 13 Davison serials that were sold to TVO.

In DWM, Canada is identified in 57 story Archives: five Hartnells (the same as above); no Troughtons; 16 Pertwees; 27 Tom Bakers; seven Davisons; no Colin Bakers; and two McCoys. The sales years are given as 1965, then 1977 to 1989. These 57 are a combination of the CBC and TVO screenings. (DWM includes Canada in AAA, FFF, and 4W, which must be a mistake, as those three did not screen in Canada until the 1990s.)

The usual categories – Stories Bought and Broadcast, Transmission, and TV listings – are detailed on a separate profile page for each of these broadcasters: 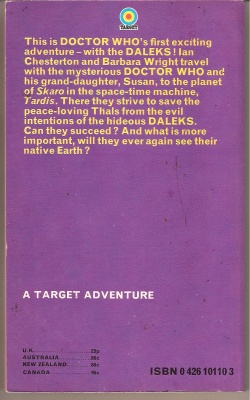 The Daleks novelisation (1973) with Canadian price

(*) One of the reasons why a Canadian price is absent from the books published in these years may be due to the agreement signed between the Canadian government and the European Economic Community (EEC) in July 1976, which provided Canada with mutual commercial and economic cooperation. And then in 1982, Canada was granted greater political independence from the UK. Of course, this could be a coincidence...

There are only a few known examples of exclusively Canadian items of merchandise. In 1984, Waddingtons Games Canada released four Doctor Who jigsaw puzzles; these featured artwork of Omega, Davros and the Daleks, Sontarans, and K9 taken from Andrew Skilleter's Profile Prints series.

The Canadian fan club, Doctor Who Information Network (DWIN) was founded in 1980; they produce the excellent fanzine ENLIGHTENMENT.

On 25-26 May 1985, Jon Pertwee appeared at the Who Party 7 convention in Kitchener, Ontario. He was interviewed for CKCO-TV:

Canada in Doctor Who

In a way, without Canada, Doctor Who wouldn't exist!

Other references to Canada include:

This category has only the following subcategory.