The CBC Times was the official CBC program guide for their transmitters. Each time zone had its own edition; while the general content of each was (mostly) identical, the TV schedule pages were of course different.

Below are the covers for some of the regional editions for the week 23-29 January 1965, when Doctor Who made its debut.

The CBC Times provided detailed episode titles and episode descriptions for each Doctor Who broadcast providing definitive proof as to which episode was aired on each date.

This information likely came from the press kits that were distributed to TV stations and newspapers with summaries provided by BBC Enterprises in Toronto. In addition to the plot summaries, the press kits included a number of promotional newspaper articles announcing the start of each new Doctor Who serial along with story details. These “stock” articles were carried by the Winnipeg Free Press, Ottawa Citizen, Ottawa Journal and St. John’s Evening Telegram. Samples of these articles can be found on the various sub-pages for our Canadian broadcast profile.

This was a fair amount of press exposure for a youth series which seems to indicate that the series was being heavily promoted by the CBC.

Introduction to Doctor Who

Unique to the Winnipeg/Prairie edition, page seven of the 23-29 January 1965 issue featured a full-page warning to viewers about a new series called Doctor Who. Issued by the CBC Head Office, this mock memo urged viewers to watch out for the Doctor, who may influence young minds. The article was illustrated with photo of William Hartnell and an image taken from The Sensorites — a story that was never aired by the CBC! 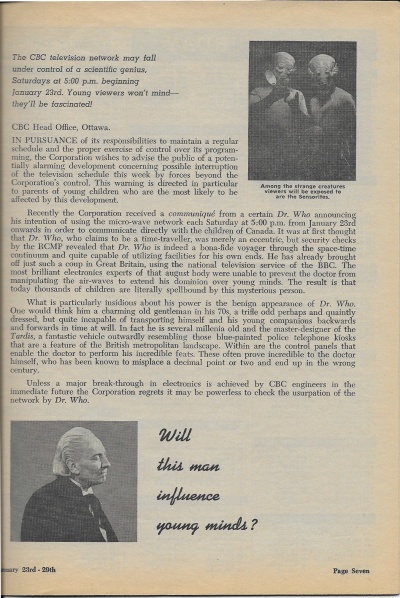 The full text from this article reads:

IN PURSUANCE of its responsibilities to maintain a regular schedule and the proper exercise of control over its programming, the Corporation wishes to advise the public of a potentially alarming development concerning possible interruption of the television schedule this week by forces beyond the Corporation’s control. This warning is directed in particular to parents of young children who are most likely to be affected by this development.

Recently the Corporation received a communiqué from a certain Dr. Who announcing his intention of using the micro-wave network each Saturday at 5:00 p.m. from January 23rd onwards in order to communicate directly with the children of Canada. It was at first thought that Dr. Who, who claims to be a time-traveller, was merely an eccentric, but security checks by the RCMP revealed that Dr. Who is indeed a bona-fide voyager through the space-time continuum and quite capable of utilizing facilities for his own ends. He has already brought off just such a coup in Great Britain, using the national television service of the BBC. The most brilliant electronics experts of that august body were unable to prevent the doctor [sic] from manipulating the air-waves to extend his dominion over young minds. The result is that today thousands of the children are literally spellbound by this mysterious person.

What is particularly insidious about his power is the benign appearance of Dr. Who. One would think him a charming old gentleman in his 70s, a trifle odd perhaps and quaintly dressed, but quite incapable of transporting himself and his young companions backwards and forwards in time at will. In fact he is several millennia old and the master-designer of the Tardis, a fantastic vehicle outwardly resembling those blue-painted police telephone kiosks that are a feature of the British metropolitan landscape. Within are the control panels that enable the doctor [sic] to perform his incredible feats. These often prove incredible to the doctor [sic] himself, who has been known to misplace a decimal point or two and end up in the wrong century.

Unless a major break-through in electronics is achieved by CBC engineers in the immediate future, the Corporation regrets it may be powerless to check the usurpation of the network by Dr. Who.

Will this man influence young minds? 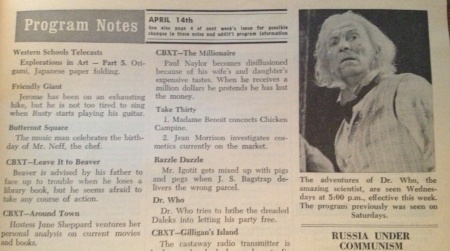 The CBC Times, along with other newspapers, posted an article announcing the change in schedule for the series from Saturdays to Wednesdays, starting 14 April 1965. This appeared in the "Program Notes" section of the edition that covered 14 April 1965. That same issue also carried a small blurb for episode 7 of The Daleks.

A curious anomaly is the press release announcing the start of the Marco Polo serial as posted in newspapers such as the Ottawa Citizen, Ottawa Journal, St. John’s Evening Telegram, etc. is that the start date for Marco Polo (Serial D) was 21 April 1965 where in fact it was 5 May 1965. It was the two-part serial Inside the Spaceship (Serial C) that began on 21 April 1965. It is almost as if the CBC program planners were treating the two serials as one long 9-part story!

Indeed, near the end of part 2 of the Inside the Spaceship serial the TARDIS lands on the Pamir plateau; the crew dresses for the cold and Susan and Barbara begin to scout the area. One could easily confuse the two serials being in fact one story. In any event, the Inside the Spaceship / Marco Polo serials lie between The Daleks and The Keys of Marinus serials and the start date for those two serials as listed in their press releases coincide exactly with the dates for the episode synopses from the CBC Times and other newspapers.

The idea that serials C and D were treated as one story is inferred by the 21 April 1965 episode synopsis published by the US TV Guide Lake Ontario Edition:

The episode title "The Edge of Destruction" is for episode C1 but the synopsis appears to be an introduction for serial D (Marco Polo).

The CBC Times provided full synopses that are worth reproducing in full. 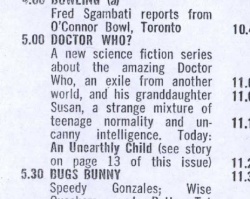 CBC Times billing for the first episode (the page 13 article is probably that which actually appeared on page 7, see above)

The full set of listings below are those for station CBLT Toronto channel 6 (Episode B5 has a question mark next to it as the CBC Times does not provide detailed info but the regional US TV Guide for that same week clearly identifies the episode as B5 (see note below):

Listing from CBC Times for the final episode to air, The Keys of Marinus

"The Expedition." Dr. Who and his friends ask the Thals to help them attack the Daleks. Susan: Carole Ann Ford. Ian: William Russell.

Quite surprisingly, for what was perceived as a youth program, several newspapers also published detailed episode synopses including TV Guide, Ottawa Citizen, Ottawa Journal, Sudbury Star and Halifax Chronicle-Herald. All of these newspapers must have been working from a common press kit as the episodes synopses match that of the CBC Times listings but sometimes have additional details.

For example, the CBC Times write-up for Marco Polo episode one for 5 May 1965 was:

5:00 DR. WHO The Roof Of The World Doctor Who, his granddaughter Susan and their two reluctant passengers, Ian Chesterton and Barbara Wright, land in Central Asia on the Pamir Plateau, the roof of the world

The Ottawa Journal/Ottawa Citizen/Sudbury Star write-up for episode one was very much the same except it included an extra sentence at the end:

While searching for food they meet the Tartar war lord Tegana who takes them to the camp of Marco Polo.

The TV Guide Lake Ontario Edition synopsis for Marco Polo one on 5 May 1965 was reworded for compactness:

"The Roof of the World." Dr. Who and his passengers search for food on the Pamir Plateau in Central Asia. Dr. Who: William Hartnell. Susan: Carole Ann Ford. Ian: William Russell.