For the purposes of this guide, Atlantic Canada covers:

This page does not include CFLA Goose Bay, which is dealt with in the Kinescopes Canada section, which covers those stations that did not have any access to the live network feeds.

For all these stations, the series started on Saturday, 23 January 1965 and ended on Friday, 9 July 1965. (No episode aired 6 February 1965 due to coverage of the Bob Hope Desert Golf Classic.)

For the ten Saturday episodes (up to 3 April) the broadcasts were via the live microwave network feed from Toronto.

For the remaining 16 episodes that started on Wednesday, 21 April 1965 the broadcast was via a week-delayed kinescope film transmitted from CBHT Halifax and relayed to all of Atlantic Canada. (For more on the use of kinescope, see our separate coverage of Kinescope Stations.) 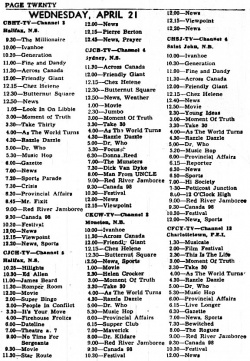 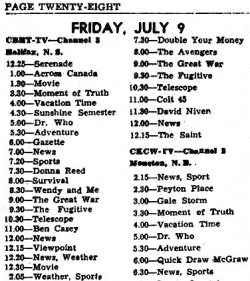 The ten Saturday episodes were seen in Atlantic Canada via the live microwave network. With the one hour time zone difference (90 minutes for Newfoundland), Doctor Who appeared at 6:00 PM (6:30 PM in Newfoundland). When the series moved to Wednesdays on 21 April 1965 (a week later than the main network), the time switched to 5:00 PM (5:30 PM in Newfoundland). This meant that Doctor Who went to air an hour earlier than Toronto, which is only possible if a recording was employed. As the last 16 episodes started a week later, and the series ended a week later relative to the main network, the recording was from the previous week (a one week delay).

Episode breakdown per air date follows the CBLT Toronto transmission, accounting for the extra week delay for the Wednesday/weekday episodes with corroboration from episode summaries listed in the Halifax Chronicle-Herald.

TV listings for Station CFSN Stephenville were in Atlantic Time even though the station is in Newfoundland. Like CFLA Goose Bay, CFSN was operated by the United States Air Force and the two air bases needed to have a common clock. Goose Bay AFB was the home of the strategic bomber fleet and Ernest Harmon AFB (Stephenville) was the home of the air refueling fleet.