From BroaDWcast
(Redirected from WAPA)
Jump to navigationJump to search

PUERTO RICO is a small island in the Caribbean Sea. It is an unincorporated territory of the United States. Its closest island neighbour is Haiti / the Dominican Republic.

Puerto Rico began its television service in February 1954. By 1979, there were five TV stations operating.

Doctor Who aired on San Juan's independent station WAPA (Canal / Channel 4), which was launched on 1 May 1954.

In 1966 WAPA was the first Puerto Rican station to commence NTSC colour broadcasts.

The principal languages of Puerto Rico are Spanish and English.

As with the other Puerto Rican TV stations, WAPA was a dual facility channel, in that it aired some of its programming in both Spanish and English, with the English soundtrack played on radio station WPRM-FM. In January 1980, the station used for this purpose switched to WZAR-FM (101.9). As far as can be determined from the published TV listings, Doctor Who aired in Spanish only.

In Spanish-language countries, the series was known as Doctor Misterio. Puerto Rico was the (approximately) 47th country to screen the series.

Time-Life Television had actively promoted and sold the series to Spanish-speaking countries in Central and South America from late 1978 onwards, soon after the big launch of the Tom Baker series to the United States in that year. Based on available evidence (see below), Puerto Rico was the third Latin American country / Spanish-language nation to screen the Tom Baker series. (See our dedicated Spanish page.)

Puerto Rico is not named in any of our regular BBC Records sources. It should have at least been included in the 1987 list, published in The Eighties - THE LOST CHAPTERS. But since the island is a recognised territory of the United States, the sale to Puerto Rico is most likely included under the generic heading of "United States" in those lists.

We became aware that the series had aired on the island from TV writer Javier Grillo-Marxuach, who in an online interview said: "I grew up in Puerto Rico, where they ran the Tom Baker adventures as a strip at 7pm on weekdays (*). They called the show "El Doctor Misterio." At the time, I probably missed a lot of the subtleties of the stories, but I fell in love with the iconography of the show…"


Puerto Rico therefore bought the standard package of Tom Baker stories in Spanish that were distributed by Time-Life Television. 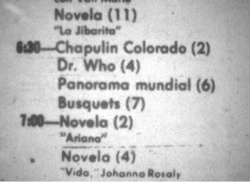 The first episode aired on Canal 4 on Tuesday, 23 October 1979 at 6:30pm in a half hour slot. The second episode aired the following day at the same time. The series continued airing in this twice per week / Tuesdays and Wednesdays schedule until 16 July 1980. (There were no episodes on 8 and 15 January 1980.)

No episode titles were given, so it is not clear if the stories aired in order, but given the random order screenings in Mexico, Chile and Ecuador around the same time, its likely story continuity was likewise ignored by Canal 4. (If the series did air in order, the first block potentially ended with Horror of Fang Rock.)

After a break of a few weeks, the series returned on Tuesday, 2 September 1980, but now screening five days per week at the much earlier time of 3:00pm. (The newspaper for 1 September 1980 was missing, so the actual return date is not certain, but if an episode did air on 1 September, there would be an odd-numbered episode count for this run). The 5 September 1980 episode was pre-empted.

The 98th and final episode would have aired on 2 October 1980. A repeat run commenced the following day, and ended 36 episodes later on 21 November 1980. (The episode count potentially takes the repeat run to the end of The Android Invasion.)

Two months later, from Monday, 12 January 1981, the series was back in its 3:00pm weekday slot, presumably picking up from where the last run left off (with The Brain of Morbius?).

The repeat run should have concluded on Tuesday, 7 April 1981, but there were a further seven episodes billed, with the last on Thursday, 16 April 1981. This was due either to pre-emptions during the 1981 run, or, with the full weeks' TV listings published in the Sunday paper, it's possible an additional week's worth of episodes was published in error.

Listings are from the Virgin Islands edition (in English) of the Puerto Rican newspaper, San Juan Star.

Unusually, the listings give the series title as "Dr Who" rather than "Dr Misterio". No story titles were given.

Puerto Rican newspapers for the rest of 1981, and then 1985 to 1988 were also checked, and no further listings for the series were found. Puerto Rico was therefore probably not one of the nine unidentified Caribbean countries recorded as being offered the series in 1985.

Puerto Rico in Doctor Who