SLIPBACK was a 6-part serial broadcast over a three week period on BBC Radio 4 VHF FM as part of its Thursday morning "Pirate Radio 4" magazine programme for children. Written by Eric Saward, and starring Colin Baker and Nicola Bryant, it was made while the television series was on its enforced 18 month hiatus.

The station could only be heard in England and border areas of Scotland and most of Wales; it was not available in more remote areas of the latter two countries - or at all in Northern Ireland.

The story was subsequently novelised by Saward and published by Target Books in 1986.

The radio recording was later released as a double-cassette by BBC Audio in November 1988, albeit with different closing credits. This was paired with the abridged edition of Genesis of the Daleks that had been issued as an LP in 1979. In January 2001, a remastered version - now with the original music - was put out on a single CD (no longer paired with Genesis) under the BBC Radio Collection brand.

The serial was repeated for the first time on BBC's Digital station Radio 7, as part of the broadcaster's Doctor Who 40th Anniversary celebrations, although this time it was in three 20-minute weekly segments. 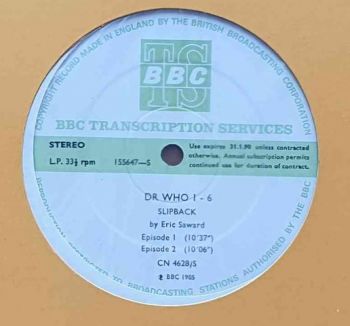 The radio serial had a few broadcasts outside the UK. Only the following are known about, but there may well be others.

Apart from the BBC broadcasts, the episodes were transmitted from Transcription Discs supplied by the BBC Transcription Services.

BBC Transcription Services usually pressed only one hundred copies of each disc, to be bicycled from country to country, station to station. Usually instructions were issued to the final radio station that played them to destroy the discs at the end of the licenced period.

However, clearly this did not always happen since a set of Slipback TDs is currently held by a private collector. The labels on both discs state "Use expires 31.1.90 unless contracted otherwise". And included with these surviving discs are "Cue Sheets" which record information about the programme.

And importantly, handwritten on these sheets are what appear to be two sets of broadcast dates; these are covered in detail below. 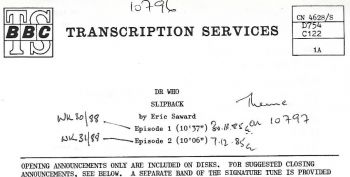 The Cue Sheets inside the TDs (see above) record the following handwritten dates:

These dates all fall on Saturdays. They are also only three months after the UK transmissions, which very likely makes them one of if not the first 'foreign' broadcasts.

It is unknown which country or radio station these airdates relate to. Based on available information, it is not Australia or New Zealand.

It's unlikely that this and the other unidentified airing - see below - was in Ireland, as any such broadcasts would surely be known about and documented by fans.

Of particular significance is that the dates are written in the DD-MM-YY format, which highly suggests the country is not the United States, where it would be in the style of MM-DD-YY.

Canadians tend to use both dating formats: DD-MM is more common in the eastern provinces, while MM-DD is in the western - which doesn't help!

Of note, the date for Episode 6 is only four weeks prior to the start of the WVIK broadcasts in February 1986 - see below.

A scan of available online US and Canadian newspapers failed to produce any relevant listings on those six dates, however it should be noted that while most US papers did publish daily radio schedules, many were lacking in enough detail to indicate that Slipback was part of the day's programming. Besides, at less than 10 minutes per episode, it was probably regarded as quick fill-in material and as such didn't warrant inclusion in the limited listings summaries that were supplied to newspapers.

From early 1986, the serial was broadcast on the BBC's World Service radio network. The BBCWS - which was primarily for news and current affairs - could be heard in certain parts of Europe, Africa, the Middle East, North America, the Caribbean, Asia and Australasia, however drama content would likely have been only on the feeds going to countries where English was spoken. (These transmissions were not from Transcription Discs.)

Comprehensive listings for BBC World Service rarely appear in foreign newspapers - which tend to print only the schedules for local radio stations - so the full extent of which countries got Slipback is unknown. (Based on available information, we are fairly certain the serial did not play on BBCWS in Australia or New Zealand in the 1980s...)

The serial did air in this region - listings for Slipback have been found in a Singapore newspaper. The broadcasts heard in Singapore could also be received in Malaysia. BBCWS was also available in Hong Kong, so it's likely the serial was also heard there. 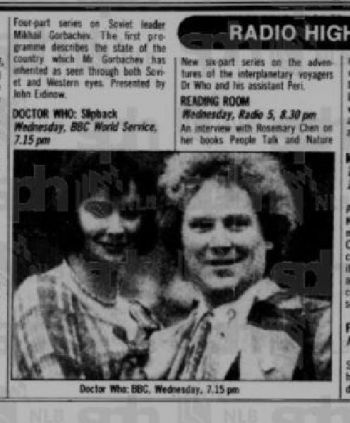 The Singapore Straits Times for 12 January 1986 carried a small preview in its Radio Highlights of the Week section, although it states the serial was on Wednesdays, not also Mondays.

The serial continued to air those two weekdays in the same slots.

Coincidentally (?), a brief run of Tom Baker serials commenced on Malaysian TV from 6 February 1986, the same week that the advertised fourth instalment of the radio play aired - and a mix up at the newspaper Malay Mail placed a synopsis for Slipback against the billing for Meglos part 1!

Both the Straits Times and Singapore Business Times contained weekly radio listings for "Doctor Who" (with no story title) through until Monday, 24 February 1986 and Wednesday, 26 February 1986.

HOWEVER, that's a span of seven weeks. Since there were only six instalments, there must have been one pre-emption on each of the two days during that period, but it is unknown which week/s this was. 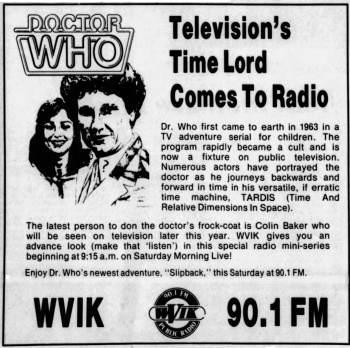 While the serial was playing on the BBC World Service, it also appeared on a couple of US radio stations. These recordings would definitely have been supplied on Transcription Discs:

There may very well have been broadcasts of Slipback on other NPR stations across the United States but radio listings may have simply said "Dr Who / Doctor Who" in the papers, and as such cannot be easily traced with OCR searches.

The Slipback / Genesis of the Daleks double-cassette (see above) was released in the States by The Mind's Eye (based in California) in late 1989. It retailed for $14.95.

The clam-shell style cassette box also bears the price of CAN$16.95, meaning the tapes were also sold in Canada.

The Transcription Disc Cue Sheets had a second set of dates handwritten on them:

Like the other set of handwritten dates (above) there is no clue as to which country or station this was, so it could be anywhere! (It's not Australia, New Zealand or Ireland. And the unusual date format could indicate it isn't the US or Canada either.)

It's possible it is the same station as the previous "unknown location", and this was a scheduled repeat broadcast albeit several years later...

If it is the United States, a perusal of various newspapers from that date range failed to produce any relevant radio listings.

With there being only two sets of dates written on these Cue Sheets, this might indicate that these TDs were bicycled between only two stations or countries between January 1986 and July 1988 - before the "use" expired in January 1990.

However it's far more likely there were other countries/stations to bicycle these discs before, during and after those date ranges - but these unknown stations didn't write their broadcast dates on the Cue Sheets.

While the "use by" on these particular discs expired on 31 January 1990, the copyright on the radio serial itself did not also expire at that time, since there are known broadcasts after 1990...

Although BBC World Service was available in New Zealand, Slipback didn't air there in 1986. It was however broadcast 11 years later on local radio...