Doctor Who aired on private stations, NHK and cable networks such as Channel Ginga. 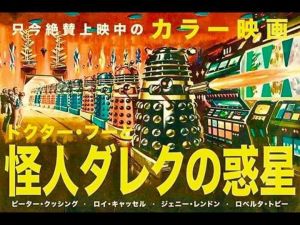 "Poster print" for "Dr Who and the Daleks"

We are not sure whether the Peter Cushing Dalek movies were released theatrically in the 1960s. We have not been able to find any newspaper listings or posters that indicate there were cinema showings.

The poster for 怪人ダレクの惑星 shown here appears to be an authentic cinema issue, but the only sources we can find for this image online are for a recent piece of "Poster Art" available through iCanvasART on Amazon, so this might be an artist's representation rather than a reproduction of an actual 1960s poster.

The film did play in English at the US military camp in Tokorozawa in March 1967.

Both films were later released on home video in Japan. As far as we can determine, the second film (subtitled) was released first - under the title " 地球侵略戦争2150" (War Invasion Against Earth 2150) - through Thorn EMI / King Video in circa 1985.

The first film wasn't released on subtitled tape (by Cannon / King Video) until circa 1986. The video box gives the title as "Dr.フー in 怪人ダレクの惑星" (Daleks' Phantom Planet / Phantom Planet of the Daleks ("ダレク" is Japanese for "Dalek"); Note; although the packaging has "Dr.フー in…" as part of the title, the film itself retains the English name without any captioning displaying a translated title.)

The second movie only was released on DVD by StudioCanal / Universal in November 2011. This had the same title as the VHS, and was also subtitled. 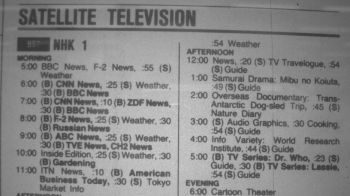 After 22 episodes (Terror of the Zygons part 4), the series took a break for three weeks, recommencing with Planet of Evil part 1 on Tuesday, 20 July. After only 13 episodes (to The Brain of Morbius 1), there was another three-week break, with the remaining three episodes of that serial showing 23, 24, 25 August 1993.

This brought the repeat run to an end.

15 years later, the 38 Tom Baker episodes were aired on Channel Ginga ("Channel Galaxy"), which launched on 3 April 2008 and was available via satellite provider SKY PerfecTV! e2 and on cable.

Very little is known about these, other than that they first screened from mid April 2008, and were later repeated in mid 2009.

According to THIS BLOG, Part 3 of Robot aired on 28 April 2008 (although it would appear this was actually part 4).

Episodes screened on Mondays, at varying times; some late at night, others early in the morning.

The following listings were found on WayBackMachine:

If the 38 week run played without interruption, the final episode would have screened on 22 December 2008.

The episodes were run again the following year; the only data we can extract online is that "Episode 15" (i.e. part 1 of Revenge of the Cybermen) aired during the week of 22-29 July 2009 in a 5pm timeslot.

The TV Movie apparently aired on one of the NHK channels in 1997 in a subtitled format, but we could not find a listing on the NHK programme archive database, however, it's possible the film was given an alternative title…

And since there is no Japanese "voice actor" listed for McGann on the Japanese wikipedia pages, this supports that the film was subtitled rather than dubbed.

It's possible the VHS tape (see below) was the same as the TV version.

References to the 2008 screenings on Channel Ginga came from online sources: HERE and HERE (jump to posting #127 and 172) and HERE.

Three Tom Baker adventures were also released on home video in the late 1980s; these were published by Pony Video for both rental and retail, with Japanese subtitles rather than being dubbed.

The Paul McGann TV Movie was released in Japan on VHS video tape in April 1997 by MCA/Universal/CIC Video/Victor Video. This was subtitled rather than dubbed (and was likely the same that had supposedly aired on TV -- see above).

A laser disc of the TV Movie (in NTSC) was also released by MCA/Universal/CIC Video (Hong Kong). But while the disc itself was manufactured in Japan (the back sleeve says "Made in Japan"), it was in English with Chinese subtitles only; this disc was available in Hong Kong, but may have also been shipped to mainland China. (There is also a DVD of the movie which has Japanese subtitles, but it is believed that this may actually be a bootleg ripped from the laser disc, the VHS or maybe even off the TV transmission, and therefore not an official release.)