From BroaDWcast
(Redirected from Canada CPN)
Jump to navigationJump to search

The CO-OPERATIVE PROGRAMMING NETWORK (CPN) was a closed circuit pay television service established in late 1977, and operated by a federation of cooperatives in Regina, Saskatoon and Moose Jaw, in the Province of Saskatchewan in central Canada. The service was not licenced by the Canadian Radio-Television Commission federal broadcast authority.

The CPN operation did not have a network connection to simultaneously transmit programming to the three cable systems. To ensure that the three CPN systems were the same and ran simultaneously, CPN made videocassette tape duplicates from master copies at a facility in Regina for distribution to the other CPN cable systems in Saskatoon and Moose Jaw. These tapes would have been wiped and reused on a regular basis.

CPN commenced broadcasts in March 1978. But after less than a year of operation, the station began to experience severe technical and structural difficulties, and by January 1979 it had gone into receivership. Its final broadcasts were in June 1979. 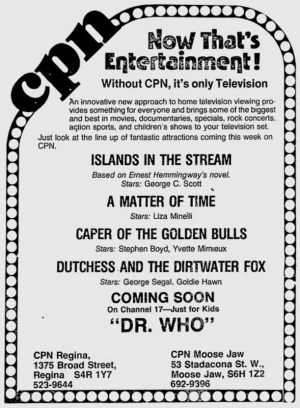 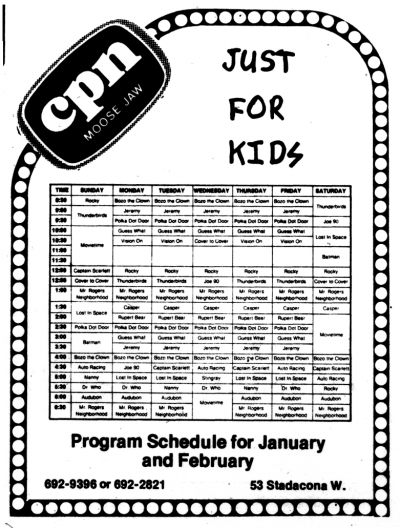 BBC sales paperwork records that the following three Jon Pertwee stories were sold to "Canada – ETV / Saskatchewan" (the ETV notation would appear to suggest that the BBC considered the sale to be to an educational station):

CPN therefore bought one story from GROUP B and two from Group C. They would have been supplied as NTSC video tapes.

These three serials had also been purchased and aired by CKVU and TVO two years earlier. It's not clear why such a small package was acquired by CPN, when many more Jon Pertwee serials were available to them. Had CPN not gone out of business so soon after its launch, it's possible that it may have acquired other Pertwee serials.

The CPN run lasted for 40 episodes (see Airdates below). The other 26 episodes were likely all to be Tom Baker stories. These presumably came from the same general package of stories that aired on TVO (and on PBS stations throughout the United States) around the same time. But given the short run of aired episodes, if CPN had purchased the full standard 23-story / 98 episode package of Bakers, they certainly did not screen them all.

The CPN broadcasts of Doctor Who commenced on Sunday, 5 November 1978 at 5.00pm. This was the first time viewers in Saskatchewan saw Doctor Who since the CBC telecasts in 1965.

From 7 January 1979, the timeslot moved to 5.30pm. Broadcasts also extended to three extra days a week, with episodes now on Sundays, Mondays, Wednesdays and Fridays. The US comedy Nanny and the Professor occupied the Tuesday and Thursday slot – see the CPN "Just for Kids" schedule "grid" at right.

The 40th and final episode of Doctor Who aired on Wednesday, 28 February 1979, a month after CPN had gone into receivership.

The three named Pertwees account for only 14 episodes, leaving 26 unidentified. Assuming the run of Tom Baker serials commenced with Robot, the run would have included all of season 12 (20 episodes), then at least one 4-parter from season 13, before coming to an end mid-way through another 4-parter!

No doubt further episodes would have gone to air had the broadcaster continued to operate.

Although this was the final airing of Doctor Who on CPN, viewers in Saskatchewan near the US border or those with cable TV subscriptions with Prairie Public Television would next see the Doctor on PBS affiliate KWSE in Williston, North Dakota (launched in 1983), which was regularly screening Doctor Who during the 1980s.

Listings have been taken from newspapers that cover all three cities in which CPN operated: the Star-Phoenix from Saskatoon, the Leader-Post from Regina, and the Moose Jaw Times-Herald. The Star-Phoenix Friday paper also contained a pull-out TV guide for the upcoming week, giving us two reference sources.

In all cases the series was called "Dr Who". None of the publications gave episode titles.

There are some generic station idents for CPN here: