Some of the local stations in Italy carried the Telemontecarlo feed, and dual branded the channel with both station names, per this 1984 sample from Telenapoli (Channel 34) in Naples:

The fact that Doctor Who aired on the ex-Monaco, now-Italian based station in 1983 could be regarded as another repeat screening by RAI of Italy and therefore be covered on the profile for that country. However, for the sake of clarity, and for the fact that the World Radio Television Handbooks list channel 35 under "Monaco", BroaDWcast is treating the "Telemontecarlo" screenings separately, and thus given Monaco its own profile page. 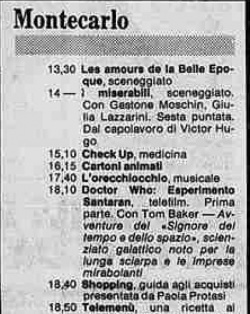 The programme was supplied as PAL colour video tapes; these tapes were dubbed into Italian, and were supplied directly by RAI, who had used them from 1980 to 1981.

TV listings have been obtained from the online newspaper archive for the Italian paper, La Stampa and Radiocorriere.

The synopsis for The Sontaran Experiment part one, refers to the Doctor as a "Signore del tempo e dello spazio, scienziato galattico noto por la lunga sciarpa e la imprese mirabolanti", which translates as "A Lord of time and outer space, galactic scientist known for his long scarf and amazing feats …".