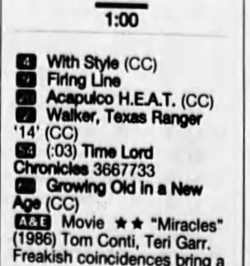 TV listings for KTEH have a programme called "Time Lord Chronicles" showing as a late night filler after the regular episode of Doctor Who on 1 March 1998, 15 November 1998 and 13 June 1999.

Although it was said to be "A Mythmakers Production" by This Week in Doctor Who, this was not a known title from Reeltime Pictures who made the "Myth Makers" interview tapes.

While it's possible this was an alternative umbrella title given to a repeat or compilation of the Myth Makers editions for Jon Pertwee and Tom Baker that KTEH had already screened several times in 1997 and 1998 - see Airdates in San Jose (KTEH) - it's more than likely that This Week... was incorrect about the origin of this feature, and that it was actually a short made by KTEH.