Evolution of Doctor Who 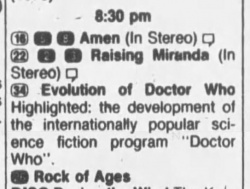 During its Pledge Night line-up the evening of Saturday, 10 December 1988, WNIT in South Bend, Indiana, screened The Five Doctors and Robot as an introduction to the series due to start on channel 34 in February 1989.

Ahead of these at 8.30pm, the station aired a half-hour feature called Evolution of Doctor Who, the description in the South Bend Tribune being: "Highlighted: the development of the internationally popular science-fiction program "Doctor Who".

In a side-piece (see the South Bend page) the paper said it "traces the beginnings of the longest-running science-fiction series in the world".

We are unsure what this was - it may have been something cobbled together by WNIT, or it was a showing of one of the many other "Making of" / "Behind the Scenes" shorts that have been shown by other PBS stations over the years - see the list on our Documentaries and Specials page (possibly one of the two Lionheart Promotional videos?).