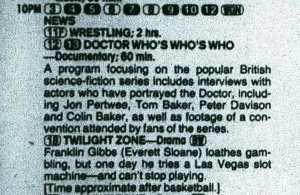 Doctor Who Who's Who was a New Jersey Network documentary hosted by Eric Luskin. It contained footage of Tom Baker on stage taken during the 11-12 February 1984 Creation Convention held in Philadelphia, plus other interview material conducted at other Creation conventions, and similar events.

Extended and re-edited interview material featured on the 1985 video, The Home Whovian.

The special was later released in the UK as a Reeltime Pictures VHS in 2001, with a DVD edition - paired with Doctor Who Then & Now - in 2004.