The Making of Doctor Who 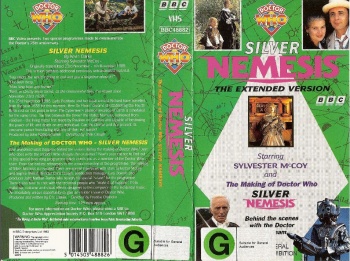 The Making of Doctor Who was a special produced by the New Jersey Network, and which first aired on NJN on 19 November 1988.

The 60 minute special went behind-the-scenes during the production of Silver Nemesis in June and July 1988. It was produced by host Eric Luskin and directed by Freddie Chisholm, and featured on-location interviews with the cast and crew of the 25th anniversary special. 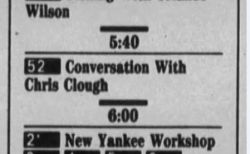 It was screened by a number of other US stations, often as a filler before or after the anniversary story, while some aired edited-down versions, such as KTEH in April 1991 where it was split in half with the two segments airing a week apart.

An edited version was sometimes listed in newspapers as "Making of a Scene", with the description "Sylvester McCoy and Sophie Aldred rehearse" (such as on WTVS in November 1991 and WYBE in May 2001). (This shorter edit may be the unidentified "Behind the Scenes" special also listed in some newspapers.)

Some papers also had a 25-minute listing for "Conversation with Chris Clough", who was the director of the serial, which we suspect is an alternative 'name' for the special.

A slightly-edited version of the special (with clips from Eric Saward scripted episodes removed due to clearances issues) appeared as an 'extra' on the April 1993 BBC video release of Silver Nemesis. (Further rights issues prevented the special from featuring at all on the Silver Nemesis DVD, released in August 2010.) 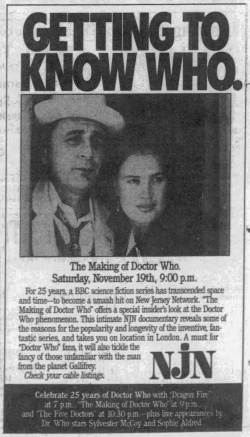