Difference between revisions of "Sweden"

SWEDEN is a Scandinavian country in northern Europe. It shares a border with Norway and Finland, and is in close proximity to Denmark.

Sweden began its television service in 1956.

From 24 March 1987, Sweden could watch a run of Doctor Who on the UK satellite station Super Channel, and on BBC Prime in the mid-1990s.

Sweden also has a number of its own satellite stations - ZTV, launched in May 1992, screened 'classic' Doctor Who in the late 1990s.

The principal language of Sweden is Swedish, although English is also spoken. Foreign programmes are usually subtitled.

DOCTOR WHO IN SWEDEN

Sweden was about the 68th country (the 14th in Europe) to screen Doctor Who (see Selling Doctor Who).

Sweden is not recorded in any known BBC Records. According to the Australian fanzine, Data Extract (issue 150), Tom Baker's first season aired there in 1997.

The website DOCTOR WHO IN SVERIGE provides detailed background to the series (old and new) in Sweden. 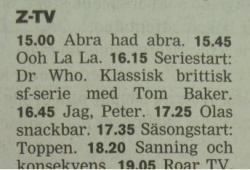 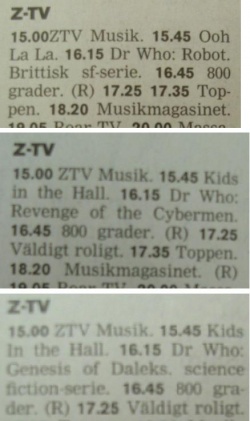 Sweden therefore bought part of GROUPs A and B of the Tom Baker stories. (The Sontaran Experiment was not purchased, possibly because the BBC had not made a "music / effects only" soundtrack for it back in 1986.)

The programme was supplied (presumably) on PAL colour video tapes complete with the original English soundtrack.

The run on ZTV commenced with the final adventure of the third Doctor, Planet of the Spiders, which aired Saturdays and Sundays, from 24 August 1996.

A run of eight Tom Baker serials commenced on Saturday, 14 September 1996, on the same Saturday/Sunday cycle. The stories aired in production order. There was no episode on 28 December 1996.

The week after the conclusion of The Android Invasion, a repeat run of the same nine serials commenced from 12 January 1997.

A third run of the episodes commenced 1 June 1997. After the repeat of part one of Robot, the series shifted to Mondays and Tuesdays (so for that week only, it aired four days in a row).

The second repeat concluded at the end of Genesis of the Daleks, on Tuesday, 19 August 1997. (There was no episode on 18 August.) The other four serials were not repeated for a second time. 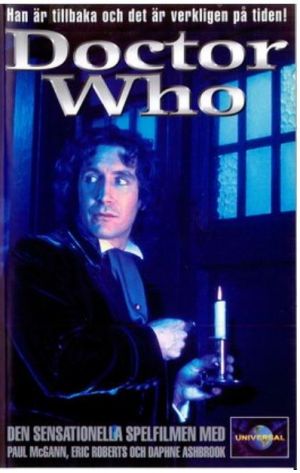 From 3 March 2008, the Swedish station TV4 Science Fiction commenced airing all the available classic series episodes, but skipping some of the Dalek ones. (See that profile for further details.)

The 1996 TV Movie was released on videotape by MCA/Universal/CIC Video/Esselte Video in late 1996. The subtitled tape was possibly for Rental Only.

The cover just said "Doctor Who", with the tagline "Han är tillbaka och det är verkligen på tiden!" (He is back and it is really about time!)

Print TV listings are from Dagens Nyheter. Although the billing from 24 August 1996 says "med Tom Baker", the first serial was the Jon Pertwee story, Planet of the Spiders. Interestingly, despite the listings being in Swedish, the story titles published were the familiar English ones, rather than the Swedish equivalents.

Sweden in Doctor Who

Coincidentally, the only two on-screen references to Sweden in Doctor Who occur in stories with the word "Seeds" in the title!