Difference between revisions of "Super Channel" 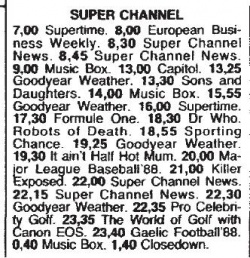 Listing for Robots of Death at 18.30 in August 1988, from the Spanish newspaper ABC 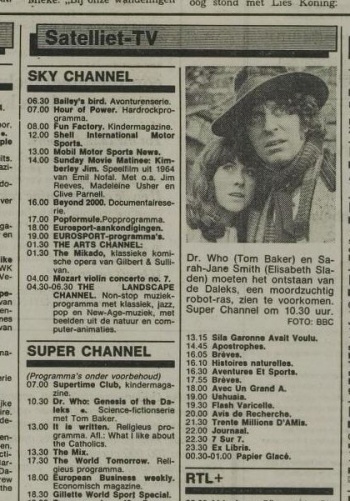 Listing for Genesis of the Daleks on Super Channel, as published in Dutch newspaper, Leidse Courant, 25 February 1989

It was available in 14 countries:

Doctor Who was originally due to start from 2 February 1987, but the debut was pulled due to lack of clearance rights from Actors' Equity members.

Clearances were eventually obtained - but only for a 16 story / 66 episode package of just the first fourteen Tom Baker stories – Robot to The Deadly Assassin, plus The Robots of Death and Horror of Fang Rock - and a new launch date was set...

DOCTOR WHO ON SUPER CHANNEL TRANSMISSIONS

From 24 March 1987, Doctor Who was part of Super Channel's regular schedule. Stories aired episodically and/or as omnibus editions.

Initially episodes aired five days a week, but from 13 April 1987 it was generally weekly on Mondays. It was Saturdays only for episodic screenings from 3 October 1987. During 1989 it was Sundays only.

For the December 1987 / January 1988 omnibus editions of The Ark in Space, Genesis of the Daleks and Revenge of the Cybermen, the standard Tom Baker titles were replaced by new ones adapted from the Sylvester McCoy opening sequence and music but with Tom Baker's face superimposed over McCoy's. New story title and writer credit captions beneath the McCoy logo, and replacement closing captions for cast and crew were also made - as illustrated here.

The final episode of Doctor Who to screen on Super Channel was the second airing of part four of Horror of Fang Rock on 6 August 1989.

In 1989, the channel was purchased by NBC. It was later re-branded as NBC Super Channel until 1996. The Europe broadcasts ceased from 20 December 1998.