From BroaDWcast
(Redirected from ZTele)
Jump to navigationJump to search

ZTÉLÉ is a Canadian French-language Cable and Satellite station specialising in Science Fiction and Fantasy programming based in Montreal, Quebec. It is also available in other Provinces, such as Ontario via subscription cable.

Both Classic and New Series Doctor Who debuted on the station when it was known as Ztélé.

This dubbed film - with the alternative title Le Seigneur du Temps - was acquired by and aired several times on Ztélé.

The first season of the New Series starring Christopher Eccleston dubbed into French had debuted on the channel on 3 January 2006. Ztélé commenced another daily repeat run of his episodes from Tuesday, 30 May.

The TV Movie was shown for the first time four days later - on Saturday, 3 June 2006 at 10pm (a further repeat of Rose had aired at 8am that morning). The Movie was then repeated on Sunday 4 June at 2.00pm.

The film played several more times in 2006, 2008 and 2009, usually scheduled at 10.00pm on a Saturday night, and sometimes with an afternoon repeat at 2.00pm the following day. (It's possible there were additional screenings in 2007, but no listings could be found.)

The known transmission dates and times are: 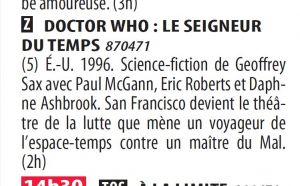 It's highly likely there were other screenings but not all the published TV inserts (see below) were available to access.

New Series episodes (sometimes in a 4:3 ratio) continued to air through until November 2014.

The above airdates are from the available issues of the weekly TV listings magazine Voila!, the full colour pull-out supplement in the Saturday edition of the French language newspaper, Le Presse. These are available online HERE. There may have been more screenings of the film (such as in 2007) but not all issues of Voila! are archived.

Each day's listings were printed in a coloured grid format: the film was always billed as "DOCTOR WHO: LE SEIGNEUR DU TEMPS".

The "(5)" in brackets in the listings is Voila! 's rating classification: on their scale of 1 (Very Good) to 7 (Poor), a "5" is an "average / medium" ranking. And despite this low rating, they still screened it multiple times!

All movies had a brief summary in the 'movies on this week' section; the same one (see clipping above) appeared each time; this translates as:

"San Francisco becomes the theatre of conflict between a space-time traveller and a master of Evil".