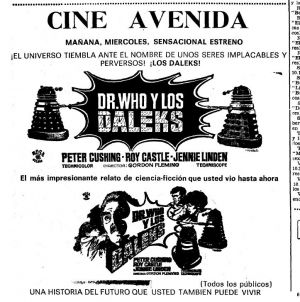 The CANARY ISLANDS are an island group in the Atlantic ocean off the west coast of Africa; they are an autonomous territory of Spain.

The first of the two Dalek movies was shown at the Cine Avenida in Las Palmas on the Gran Canaria island (Grand Canary Island) on Wednesday, 28 December 1966.

Gran Canaria is the third-largest but the second-most-populous island; it's very likely that the movie was also screened on Tenerife, which has the highest population.

Canary Islands in Doctor Who