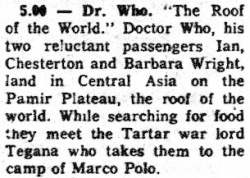 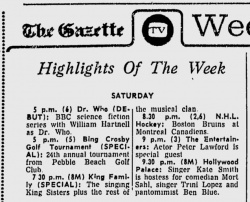 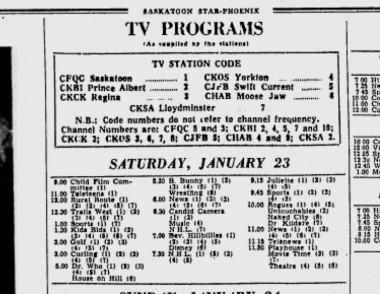 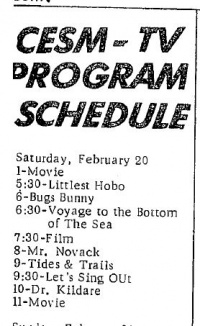 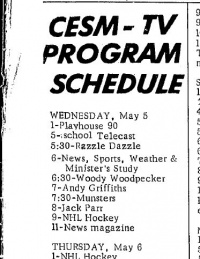 We have accessed two newspapers from Thompson, The Thompson Citizen and The Nickel Belt News, for all of January to the end of July 1965 (there were no editions available after August) and there were no listings at all for Doctor Who. What is odd however is that both newspapers usually just printed the word "Movie" from 1pm to 5:30pm on Saturdays and 1pm to 5pm for the other six days of the week. Unless more than one movie was screened during that four hour slot, it’s possible that Doctor Who did in fact air at 5pm on Saturdays as it did elsewhere, but for some reason did not get a billing of its own.

From 14 April 1965, the series shifted to Wednesdays airing at 5pm or 5:30pm in the other regions. The 5pm slot on CESM was occupied by a programme called "School Telecast", and the 5.30pm slot by "Razzle Dazzle" or "Popeye Playhouse". However, as it had been on Saturdays, the lengthy 1pm to 5pm slot had a single listing in the newspaper, which was often the generic "Movie" or specifically the long-running series "Playhouse 90"; as the title suggests each play ran for 90 minutes, and as such could not have filled the entire slot on its own. So, did Doctor Who screen during this four hour slot but for some reason as before never received its own billing?

If the newspaper listings are to be taken as read, then the answer is probably "No".

It's worth noting that even if CESM had aired Doctor Who episodes that had been pre-recorded on tape there is virtually no chance such tapes survived as they would have almost certainly been reused.