There is just one television station: Radio Caracas Television (RCTV), a government-owned commercial broadcaster, which operated channels 2, 3, 7 and 10.

Despite BBC Records indicating a sale to Venezuela, there is some doubt that the series did actually screen. But potentially, the stories that aired were:


Venezuela therefore bought the standard package of the GROUP A to D of the Tom Baker stories.

Five months later, on Sunday, 1 October 1967, the series returned, but now at the morning timeslot of 10.15am. Three weeks later, the timeslot changed to 10.00am, where it remained till the end of the run.

Seven months later, an 18 week run commenced, on Friday, 13 September 1968 at 3.30pm. The run ended on 10 January 1969. If the run started with The Dalek Invasion of Earth, the last episode of the run would have been The Space Museum part four. 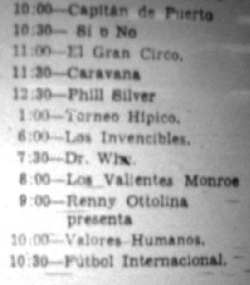