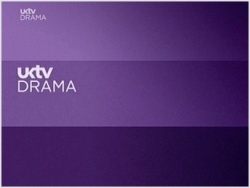 UKTV Drama is a satellite channel seen in the United Kingdom and Ireland as part of the UKTV network.

The channel was launched in November 1997 as UK Arena. It was renamed UKTV Drama in March 2000.

When the rights to Doctor Who transferred over from UK Gold in July 2007, UKTV Drama continued with a short run of selected episodes, including the unaired "Pilot" version of An Unearthly Child. Episodes from the new series were also shown.

Then, between January and October 2008, the station aired all the Tom Baker stories (bar Genesis of the Daleks and The Talons of Weng-Chiang), with some episodes airing twice during the day, and several stories were also later repeated out of sequence.

In October 2008, the station was rebranded as Alibi (aka alibi), and the new schedule featured mainly crime dramas. All other genre shows were moved to Gold or the newly-created Watch. But by this time, the run of Doctor Who episodes had already concluded, so the series wasn't transferred to another channel.

Both Australia and New Zealand have a pay satellite channel called UKTV, but despite it having a similar name, this broadcaster (launched in 1996) was not affiliated with the similarly-named UK channel. Also known as BBC UKTV, the antipodean stations broadcast a selection of classic as well as new series episodes of Doctor Who on a regular basis (the Australian run of classic episodes ended in November 2013, and the New Zealand station ended its run in 2015).