The Day of the Doctor

THE DAY OF THE DOCTOR was the 50th anniversary edition of Doctor Who; the 77-minute special was broadcast by the BBC at 7.50pm on Saturday, 23 November 2013, as well as being shown in cinemas up and down the country, as a 2D or 3D presentation.

Although most cinema screenings were scheduled to begin at the same time as the TV transmission at 7.50pm, the cinematic presentation had additional introductory material, which meant the main feature itself did not start until after 8pm. 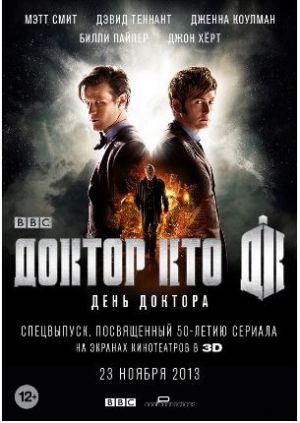 The special was also simulcast around the globe, with the majority of foreign stations screening the episode all at the exact same time.

For most of the countries in Latin America, South East Asia, and continental Africa, the broadcast was via the local BBC Entertainment satellite channel (which had previously been a home to Classic Doctor Who when it was called BBC Prime).

By late 2013, the New Series of Doctor Who had been available on those BBC Entertainment channels for several years: in Asia since October 2006; South Africa since September 2008; and Europe and the Middle East from November 2009.

For all other countries, the special was shown on a local station. The simulcast was offered to the primary broadcaster who had the option of whether or not to take the simulcast.

In the case of New Zealand, however, although Prime was originally to show the episode starting at 8.50am (which, due to the country's relative position over the international date line, was on Sunday, 24 November), it later decided to air the story at 9am, meaning a delay of 10 minutes. Some reports state this was because Prime couldn't air a PGR-rated programme prior to 9am, but the true reason for the time-shift was the broadcaster preferred to have its programmes start on the hour.

It's unknown how many viewers in each country tuned in to watch the special broadcast - especially for those in the Asia / Pacific region, where it was in the very early hours of the morning (of Sunday, 24 November), while in a number of non-English speaking parts of Europe, Africa and Asia it was the half-century celebration of a programme that had only been showing for a couple of years.

Some BBC reports stated that the special was broadcast in "15 languages", but it's unknown what those languages were, or whether it was dubbed or just subtitled.

The special was also shown in select cinemas across the globe (some reports cited as many as 1,500 theatres in 25 countries), some of which also showed the 3D version. 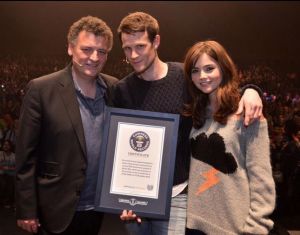 On the morning of Sunday, 24 November 2013, at the 50th Anniversary event held at the ExCel convention centre in London, exec-producer / showrunner Steven Moffat was presented with a certificate from Guinness Book of World Records declaring that:

"The record for the largest worldwide TV drama simulcast was achieved by the special 50th Anniversary episode of Doctor Who, which was broadcast in 94 countries across 6 continents at 19:50 (GMT) on 23 November 2013"

A slightly different version of the Guinness certificate was revealed by the press in the days that followed; this one upped the number of countries to 98:

"The largest TV drama simulcast was achieved by the special 50th Anniversary episode of Doctor Who, which was broadcast in 98 countries across six continents at 19:50 (GMT) on 23 November 2013"

And the print edition of Guinness World Records dated 2015 on the cover but published in 2014 says:

Footage of the presentation at the ExCel can be seen on Youtube:

We have not been able to find one official list that names all 98 countries, but combining data from all the various published lists we believe have identifed them - plus a few more!

In all likelihood, any "official" figure given would only ever be a rough estimate, one that has taken into account the geographical catchment area of each of the BBC Entertainment signals, irrespective of whether or not anyone was watching.

Indeed, several of the countries named by the BBC are island groups, plus there are 14 eastern European nations that could receive the Russian channel NKS, which does indeed give the total closer to (or over) 98.

Some of the foreign news reports at the time also named other countries in their lists, such as Denmark and Norway - which as far as we can tell, did not take up the simulcast. And like New Zealand, there would be several other countries that did not join the simulcast but who also did screen The Day of the Doctor at a later time or date -- see our New Series page.

On Saturday, 21 March 2020 at 7pm in the UK, another form of simulcast was held online, with fans around the world taking part in a communal rewatch of the episode via whatever method they could - pop in the DVD, watch via an Online service (BBC iPlayer, Netflix, iTunes, Amazon Prime, Google Play) - and participate in the "live chat" on Twitter, using the 2013 hashtag #SaveTheDay.

The idea for the live rewatch came from Doctor Who Magazine's Emily Cook as a means of beating the self-isolation blues by bringing together fans (especially those stuck inside while exercising social distancing) during the worldwide COVID-19 crisis.

Fully supporting the initiative, Steven Moffat wrote a special introduction video featuring a puppet of Strax the Sontaran (voiced by Dan Starkey); this was released online at 6.30pm. Moffat also contributed to the rewatch by Tweeting a live commentary.