Difference between revisions of "Taiwan"

TAIWAN is an island off the east coast of China.

Taiwan began its television service in 1962.

The principal language of Taiwan is Chinese (Mandarin, Cantonese). Programmes were broadcast in Chinese or English, and/or with subtitles. Doctor Who aired in English with Chinese subtitles.

DOCTOR WHO IN TAIWAN

Taiwan was approximately the 58th country to screen the series, and one of the last countries in Australasia/Asia (see Selling Doctor Who). 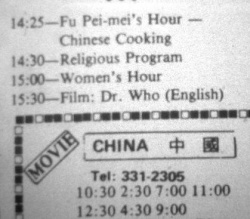 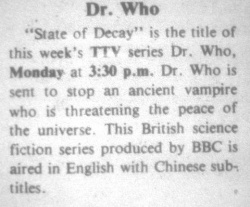 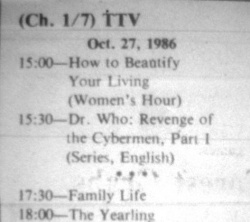 Revenge of the Cybermen, part one, 3 November 1986 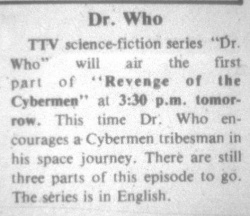 TV Highlights: Revenge of the Cybermen 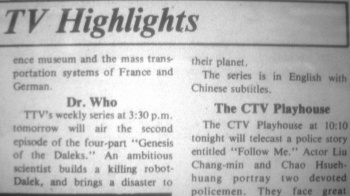 TV Highlights: Genesis of the Daleks – in four parts 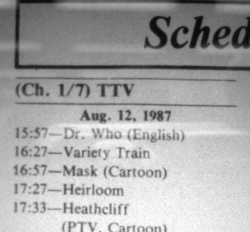 The Eighties - THE LOST CHAPTERS records a sale of "(6)" stories (by 10 February 1987). Only five serials have been accounted for.

Taiwan is not identified in any of the DWM Archives.

Taiwan therefore bought an assortment from GROUPs A and G of the Tom Baker stories.

Episodes were broadcast in English, with Chinese subtitles.

The series started on Monday, 18 August 1986, at 3.30pm. The listings merely state the programme was in "(English)". It is not known what the first 4-part serial was. The 8 September episode was pre-empted by a Variety Show.

The 20 October episode of the second serial was identified as being State of Decay Part IV. The following week, Revenge of the Cybermen commenced. On 24 November, Genesis of the Daleks started; this was advertised as being a four-parter. Was this a re-edit of the special two part (2 x 45 minutes) version that had been created by the BBC for the 1982 Doctor Who and the Monsters repeat? Or was it that they had ordered and purchased Genesis of the Daleks but were instead sent the 4-part Destiny of the Daleks?

The fifth serial screened eight months later, from Wednesday, 12 August 1987, with all episodes starting at 3.57pm: no title was given so it is not known what the four-parter was. The final episode aired on 2 September 1987.

As noted above, The Eighties stated that six serials had been sold to Taiwan by February 1987. Airdates for the sixth serial were not located. (Of course it's possible the 1987 memo was inaccurate.)

TV listings have been obtained from the newspaper China News, an English-language newspaper. The paper says that Doctor Who is broadcast "in English, with Chinese subtitles".

The paper carried basic listings in the main daily page. For the first seven episodes, the listing usually just said "Dr Who" or "Film: Dr Who (English)" or similar variants. It wasn't until the eighth episode that a title was given: State of Decay. Unusually, the episode numbers were always identified in Roman numerals – Part I, II, III, IV.

The newspaper also sometimes had a "TV Highlights" section, in which story titles and/or brief synopses were often given. There was no Highlights section to identify the four 1987 episodes.

The 1996 TV Movie was available in China on laser-disc and DVD, with Cantonese subtitles. The title translated as Murder in Space or Death of Time.