SWAZILAND is in the south of Africa, bordered by South Africa and Mozambique.

Despite the size of the population, very few people had televisions in the first few years, with only 500 sets licensed by 1980.

The official language of Swaziland is English.

DOCTOR WHO IN SWAZILAND

Swaziland was the about the 43rd country to screen Doctor Who; it was the 14th in Africa since 1965 (see Selling Doctor Who). Interestingly, it was the only new African country during the SECOND WAVE of sales. 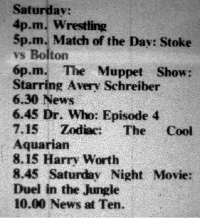 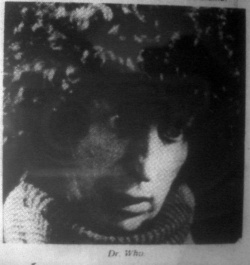 Swaziland therefore bought most of GROUPs A, B, C, and F of the Tom Baker stories.

Swaziland therefore bought one story from GROUP A of the Peter Davison stories.

Three days after television transmissions commenced in Swaziland, viewers saw Doctor Who; the series started on Saturday, 4 February 1978, at 6.30pm. The first story was Spearhead from Space. The other three stories - see the above table – were all that were left of the PAL colour Jon Pertwee stories that were still available at the time.

Mid-way through the run, the timeslot changed to 6.45pm. After a run of 18 episodes, the series ended on 3 June 1978. (NOTE: The TV listings for 3 June record Match of the Day with its usual 5.00pm start time, followed by The Muppet Show, but Doctor Who is missing from its 6.45pm timeslot; but it must have aired, otherwise the final episode of The Monster of Peladon is unaccounted for.) 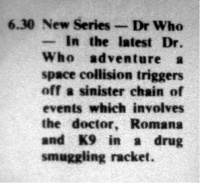 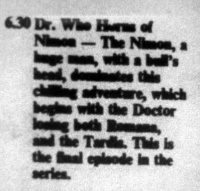 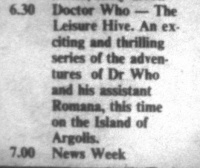 On the Island of Argolis: The Leisure Hive Part Three, 27 August 1983

When the series returned nine months later, on Saturday, 17 February 1979 – it was with a new Doctor. This may have been somewhat confusing for viewers (all 160 of them!), especially since Planet of the Spiders had not screened.

The new series aired at 6.00pm for all episodes. This 14 week run ended on 19 May. This run was, presumably Robot through to Revenge of the Cybermen, with all stories screening – we again presume - in production code order.

The third run of episodes began seven months later, on Saturday, 5 January 1980, at 6.30pm. This was another 14 week run, concluding on 5 April 1980. Assuming the stories aired in production code order, the run most likely ended with Pyramids of Mars.

The series returned for its fourth run on Saturday, 8 November 1980. This was the longest, lasting 39 weeks (with a break on 20 June 1981 due to the TV coverage of a sporting event). Picking up from where the previous left off, this would have started with Planet of Evil, and concluded with The Robots of Death?

After a short break, the series was back on Saturday, 26 September 1981, at 6.00pm, ending 9 January 1982. For this 16 week run, there would have been four 4-parters, or two 6-parters and one 4-parter. Since The Eighties records a sale of 30 stories, the former combination does contribute towards the tally of 30, whereas the latter would only allow for 29.

(At a guess, the four 'unknown' stories were The Invisible Enemy, Image of the Fendahl or The Sun Makers, Underworld and The Creature from the Pit, as those four were seen in more countries than any of the Key to Time serials and the first two of season 17.)

Eight months on, Nightmare of Eden (Hooray! The papers finally give story titles!) aired on Saturday, 18 September 1982. This short 8-week run, ended on 6 November, with part four of The Horns of Nimon.

After another long break of nine months, The Leisure Hive opened the seventh run, which ran for 16 weeks from 6 August 1983. Only the first three stories from Tom Baker's final season aired, with the last episode of Full Circle screening on 22 October.

The first four Tom baker stories were probably sent to Malta, where they aired a few months later.

One week later, Swazi viewers found themselves watching a new Doctor, when Peter Davison's second story Four to Doomsday aired on 29 October 1983. (This was the first story he recorded). The last episode aired on 19 November 1983.

(Exactly one month earlier, on 30 September 1983, viewers in Gibraltar had also experienced this unusual jump from Full Circle to Four to Doomsday... This can't have been a coincidence, and must be due to some sales restriction or policy of the BBC's at the time.)

124 episodes of Doctor Who screened in Swaziland over a six year period, 1978 to 1983 inclusive. This had been made up of four Pertwees, 25 Bakers, and one Davison, which indeed adds up to 30, as is recorded in The Eighties.

There is no clear record that Swaziland screened Doctor Who again. 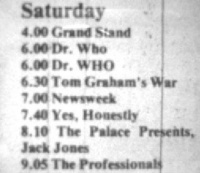 TV listings have been obtained from Times of Swaziland and The Swazi Observer.

The majority of listings gave the series name as "Dr Who". Towards the end of the run, it fluctuated between that and Doctor Who in full. In The Swazi Observer of 11 July 1981, a setting error saw the 6.00pm listings duplicated: "Dr Who" followed by "Dr WHO". And on 23 October 1982, it was: "Dr Who?" (complete with question mark).

There were no TV listings in the 4 February 1978 paper, but it's clear that Doctor Who must have aired the week that television broadcasts commenced in Swaziland, given that there are 18 episodes to be accounted for in the first run.

The 20 May 1978 episode was simply billed as "Dr Who: Episode 4"; this was part four of The Monster of Peladon.

None of the listings gave story titles until the 101st episode, which, from the published synopsis, was Nightmare of Eden.

For the short 8-week run in late 1982, the first five episodes were given a short synopsis that described Nightmare of Eden; the last one must have been an error. The second episode of this run was illustrated with a photo of Tom Baker (see image above). The final two episodes did give the title as "Horns of Nimon" (sic).

For the final run, the first (billed as The Leisure Hive) and second episodes were set "on the island of Argolis". The next story was billed as Meglos for two of its episodes. The third serial was either billed as Full Circle, or gave a synopsis for that adventure. The thirteenth episode of the run, 29 October 1983, was billed as "Fair To Doomsday" (sic). The billing said it was Peter Davidson's (sic) second story, and yet this was the first and only one of his to screen! All three of the final episodes were listed as being Full Circle, which must have been a printing error, rather than an indication that Full Circle aired twice.

Swaziland in Doctor Who