STARZ INC, founded in 1991, is a US entertainment company (owned by Lionsgate Entertainment, based in Colorado) with pay TV stations, media distribution and production companies. 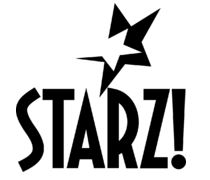 A movie channel, called Encore, was launched in April 1991. It had eight sub-channels, each specialising in different genres:

A third movies stream - Plex:Encore 1 (aka Plex / PLEX) - launched in January 1997. This provider had three channels:

HD and On Demand services were introduced later.

All stations were commercial-free, programmes had Closed-Captioning, and some also offered a second audio program (SAP) in Spanish.

DOCTOR WHO ON STARZ 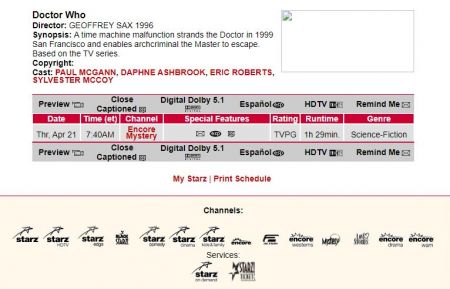 Starz acquired the exclusive US rights to the 1996 Paul McGann TV Movie in mid-2004 (the rights held by Sci-Fi Channel had recently expired), and the movie was shown multiple times on various Starz channels between June 2004 and November 2005.

The channels on which the Movie (rated TVPG) is known to have aired are:

(Since Encore didn't have a "Sci-Fi" or "Fantasy" stream, the Movie was instead assigned to its "Mystery" and "children's" channels, and - somewhat bizarrely! - also its "Westerns" channel.)

According to the listings (both online and print), the TV Movie was shown with Spanish as an alternative language option. But what's not clear is if this means subtitling or dubbing.

This SPANISH DUBBING site says a dub was recorded in Madrid in 1997 (actor Luis Bajo voiced for both Paul McGann and Sylvester McCoy!). The site says it was recorded for "television", but we could find no evidence of the Movie subsequently being shown on TV anywhere in Spain. This dub is however used on the VHS release.

Since a European Spanish dub did exist, it's possible this was what was supplied to Starz. But of note, there are some marked differences between European Spanish and the Latin American Spanish that is spoken in the US.

Curiously, the film was NOT also shown on Starz's Spanish-language movie channel Encore Español. So, it's possible this is because the supplied Spanish dub didn't use Latin American Spanish - or it's because the movie was only subtitled...

The Movie screened several times per month, bouncing between channels (screening on Encore Mystery one week, then on both Mystery and MOVIEplex the following week; it also appeared on WAM! for a brief period, plus a couple of showings on the Westerns channel).

The following dates, timeslots (Eastern Pacific; PDT/PST) and channels have been collated from the This Week in Doctor Who weekly bulletins:

The Movie debuted on Starz on 3 June 2004, screening on the Encore Mystery channel. After six showings there, it alternated between that and MOVIEplex from 18 June until the end of the month.

After a four month gap, the Movie returned, again exclusively on Mystery, then later alternating between that and MOVIEplex.

In December, the film also appeared on WAM! for six showings (WAM! was for children / families). 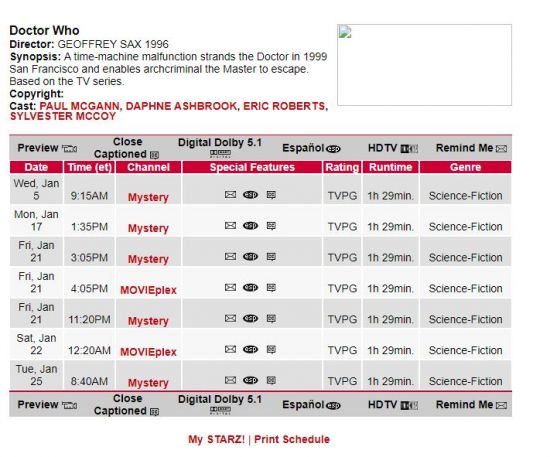 Schedule for the TVM on Starz, January 2005 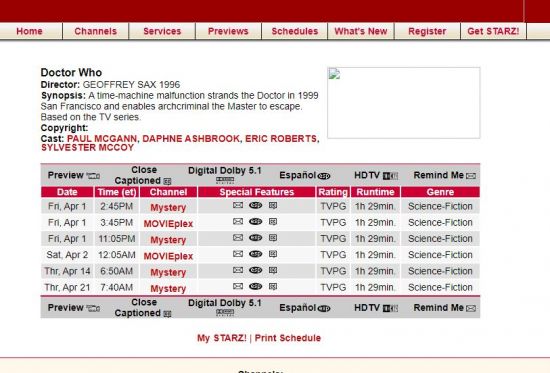 Schedule for the TVM on Starz, April 2005

Regular screenings on Mystery resumed in 2005, then later also on MOVIEplex.

[The online schedule for January 2005 is at right]

[The online schedule for April 2005 is at right]

In November, the film appeared on Starz's Encore Westerns channel for four screenings, as well as in its usual place on Mystery and MOVIEplex. 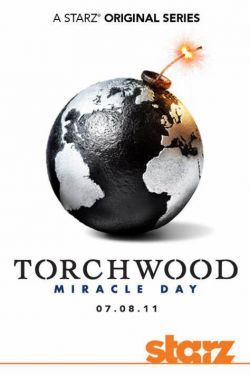 Starz also produced its own original programming. In 2011 it co-financed the fourth season of the popular Doctor Who spin-off.

Torchwood: Miracle Day debuted on the channel on 8 July 2011 (it was shown in the UK on 14 July); the tenth and final episode of the mini-series aired on Starz on 9 September 2011 (15 September in the UK).

Only a handful of archived Starz pages that had Doctor Who on them could be found on WayBack Machine:

This Week in Doctor Who provided a run-down of the screenings in its weekly bulletins, although not all of these have subsequently been tabulated into a full list of airdates. Our summary above has been extrapolated from the bulletins.

Various US newspapers from June 2004 were also accessed; some of the many print listings are sampled above.

These are some samples of general Starz trailers and idents (none with Doctor Who, sadly...)