A ROKU device is a set-top digital media player through which one can access Roku's own film and TV streaming site, but also Apple TV, Amazon Prime, Vudu, HBO Max and Pluto TV.

Roku's ad-supported TV channel (launched in 2017) is (currently) available only in the US, UK, Mexico and Canada. The service is planning to expand into Europe, Latin America and Australia.

Note: this profile is taken from the Canada site (on Channel 472) as that was the only one that wasn't fully region-locked to us.

DOCTOR WHO VIA ROKU (Canada) 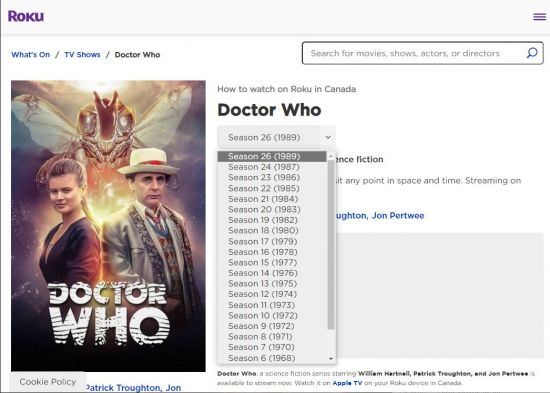 The New Series (all seasons 2005 to date) are available, as are both Peter Cushing Daleks films.

Classic Doctor Who became available via Roku during 2021. Access to other providers such as AppleTV, Amazon Prime and Vudu was on a $1.99 per episode basis.

Exactly how many and which stories are available through Roku is not known (none of the menu screens provides a comprehensive list), instead these only give generic headings for 23 of the 26 "Seasons" from 1963 to 1989 (there is no menu heading for Seasons 2,3 and 4).

For some odd reason, one of the Roku Canada menu screens for Doctor Who is illustrated with an image taken from the Big Finish audio adaptation of Mark Gatiss's novel "Nightshade".

Stories are shown episodically; there are commercial breaks with an intermission 'countdown' graphic on screen to advise viewers that "Doctor Who We'll be right back!" - see below

In terms of one of the online menu displays (which links to episodes currently on iTunes), the following Classic Doctor Who stories are known to be available in Canada.

Note: although the drop-menus say "Season 30" [sic], "Season 99" [sic], "Season 144" [sic], etc, these are actually just single serials; the numbering - which doesn't take into account Shada - is simply the sequential story number - e.g. The Pirate Planet is the 99th Doctor Who story: 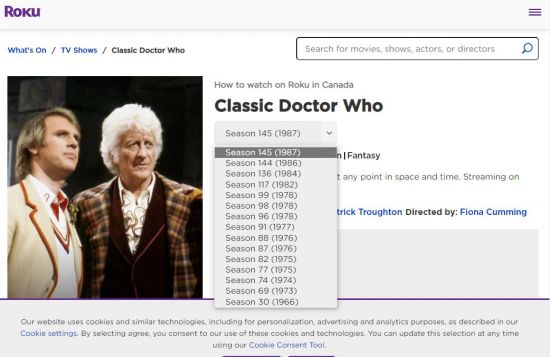 NOTE: These "Season" / story number links change on a regular basis, as stories are removed and others added. The above screen-grab was taken in late October 2022; one week later half the "Seasons" listed were different. Since the menus are in flux, we won't attempt to track and update the story list.

Other stories known to be available (i.e. from various Twitter comments made about Roku) include:

The fan-made drama "The Airzone Solution" is also available: