Difference between revisions of "Reeltime Pictures"

REELTIME PICTURES is a video production company established by Keith Barnfather in 1984. 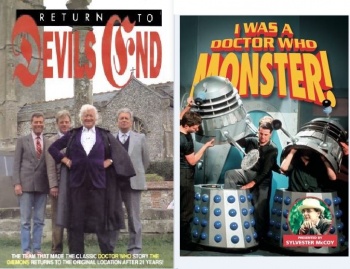 Predominantly known for producing the Myth Makers tapes -- a long-running series of interviews with Doctor Who actors and production crew (released on VHS, and later DVD and download) -- Reeltime also made a number of direct-to-video dramas featuring licenced characters, such as Benton (Wartime (1998)), the Brigadier, Yeti, Victoria Waterfield and Sarah Jane Smith (Downtime (1995)), Draconians, Sontarans and Ace (the Mindgame series (1998, 1999)), the Daemons and Olive Hawthorne (Daemos Rising (2004), The White Witch of Devils' End (2017)) and Sil (Sil and the Devil Seeds of Arodor in 2019).

Downtime and Daemos Rising featured the character of Kate Lethbridge-Stewart (played by Beverley Cressman) who would later appear in the new television series (played by Jemma Redgrave).

Reeltime also repackaged and distributed some of the video dramas produced by BBV Productions. It also had the exclusive UK rights to release VHS and DVD editions of the New Jersey Network documentaries Doctor Who's Who's Who, Doctor Who Then & Now and The Home Whovian (all in 2001). In 2003 they released the Patrick Troughton in America special.

Two of Reeltime's highly-regarded interview features were Return to Devil's End (1993), which took the principal actors back to the village of Aldbourne where The Daemons had been filmed in 1971, and I Was a Doctor Who Monster! (1996), hosted by Sylvester McCoy, featuring interviews with many of the actors who appeared behind latex masks and inside rubber costumes. 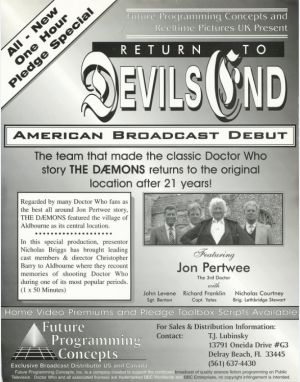 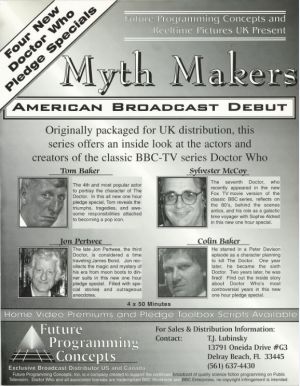 Several of the Reeltime productions were sold to PBS stations in the United States, with the first appearing in late 1996.

This was by arrangement with a US company called Future Programming Concepts Inc (established by well-known fan T J Lubinsky in June 1996), which had been awarded broadcast and limited home video distribution rights for the Reeltime videos in the United States and Canada, with the productions being advertised and promoted as "Pledge Specials" .

FPC originally planned to sell three distinct Packages of material, the first consisting of the Pertwee, T Baker, C Baker and McCoy Myth Makers interviews; the second was to be Return to Devil's End, Just Who on Earth is Tom Baker? and the Yeti drama Downtime; and Package 3 was a selection of 32 half-hour Myth Makers interviews.

However, these plans changed, and ultimately, the only Reeltime productions that were eventually made available via FPC were: 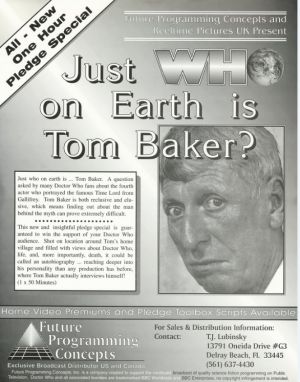 FPC promotional flyer for Just Who on Earth is Tom Baker?

(Some of the TV listings incorrectly stated I Was a Doctor Who Monster was an interview with McCoy about his previous appearance in the show, stating that "Before becoming Doctor Who, Sylvester McCoy played an alien in a series episode"!)

These Packages were first picked up by KTEH in San Jose, California, since they were at that time one of the few remaining stations still screening "Classic" Doctor Who, and they were hungry for new content to show.

FPC also sold I Was a Doctor Who Monster to the Canadian cable station Space.

In the TV listings for KTEH in 1998 we also found an item called Time Lord Chronicles, which the "This Week in Doctor Who" bulletin claimed was "A Mythmakers Production", but this does not match any titles from Reeltime. We have been unable to verify what this is, but it may have been an umbrella title given to the Package 3 interviews, or it may have been an original product from KTEH.

In the early 2000s, KTEH picked up two additional titles from Reeltime, a deal which did not involve Future Programming Concepts Inc:

The following are just some of the US stations to have screened Reeltime Pictures programmes: 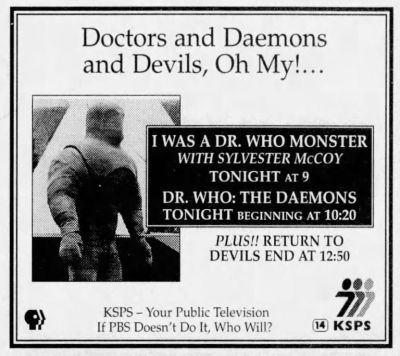 Several other US PBS stations aired a selection of the Reeltime features during 1997, 1998 and 1999, but we don't have full airdates or listings clippings for these.