Once Upon a Time Lord

Once Upon a Time Lord 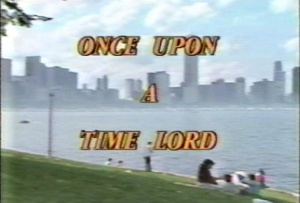 Once Upon a Time Lord title caption 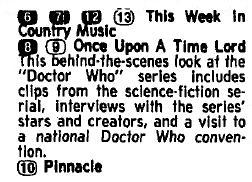 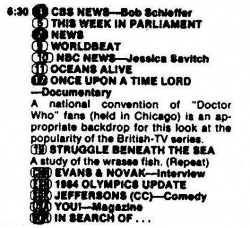 The Denver PBS station KRMA produced this documentary that was filmed at Panopticon West in Chicago, 16-18 July 1982. It was broadcast locally 24 October 1982. The special was bought by 45 other stations and was shown throughout the United States in March 1983.

There are two versions of the special. The complete version runs 28:04. A shorter version running 23:29 was made for pledge breaks by trimming 15 scenes. One scene, John Nathan-Turner announcing the sale of the Davison episodes, was removed completely. The extract from the Arabic dub of Planet of Giants was also reduced in length.

11 minutes of footage from the documentary was used for an edition of BBC-2's long-running finance and business affairs series "The Money Programme"; shown at some point between late 1982 and the end of 1984, the item was used to illustrate how popular and financially successful the series was in America. This was shown again in a subsequent edition of the BBC's "Did You See..?" weekly review programme:

In the late 1990s a search of the KRMA archives revealed that the master tape was missing, presumed wiped.