From BroaDWcast
Revision as of 02:46, 8 November 2019 by Jon Preddle (talk | contribs) (Created page with "'''NETFLIX''' is an online provider established in the United States in August 1997; initially operating as a rental order service in which disks wer...")
(diff) ← Older revision | Latest revision (diff) | Newer revision → (diff)
Jump to navigationJump to search

NETFLIX is an online provider established in the United States in August 1997; initially operating as a rental order service in which disks were sent through the mail, the company introduced streaming of programme content in 2007; by 2010, all their content was available only by streaming.

Netflix was also established in other countries and regions - Canada (from September 2010), Mexico, Caribbean and South America (September 2011), UK and Europe (during 2012), Japan (September 2015), Australia, New Zealand, and the rest of the world (during 2016) - each provider having its own catalogue of programmes due to clearances and rights issues.

DOCTOR WHO ON NETFLIX

While the New Series is available on all of Netflix's international providers, a limited selection of the Classic series was initially found only on the US platform starting from 1 May 2013.

The selection of stories was very similar to that which had previously been available on Amazon Prime, however, no stories featuring the sixth Doctor (Colin Baker) were included. 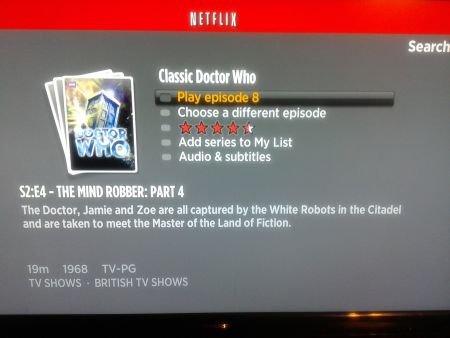 Six stories only, three of which were not on the US list:

Tomb of the Cybermen on Netflix Canada 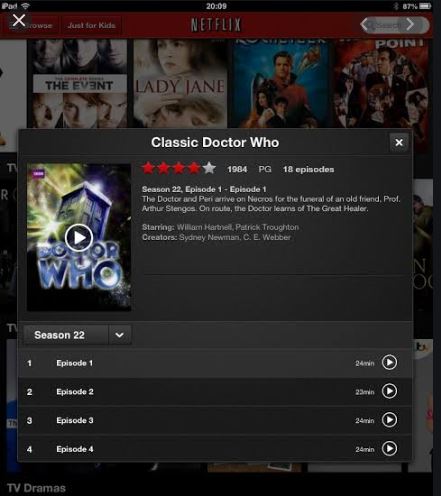 At the end of January 2016, both Netflix US and Hulu Plus lost their rights to stream Doctor Who, and from 27 March 2016 until the launch of Britbox in early 2017, the series was only available in the US on Amazon Prime… (Subscribers to Netflix in the UK, Canada and other countries, however, were not affected by this, and retained access to Doctor Who after 1 February.)

However, despite no longer able to stream the series, Netflix retained the rights to sell Doctor Who on disk by mail order, and currently has over 40 titles (both Classic and New Series) still available to purchase.

Thanks to John Geoffrion for the list of titles