Difference between revisions of "Nepal"

NEPAL is a land-locked nation in central Asia.

By the mid-1990s, a number of privately-owned stations had been established, as well as numerous satellite and cable channels available, including at least one BBC satellite station.

The principal language of Nepal is Nepali. Foreign-language television programmes are usually subtitled.

DOCTOR WHO IN NEPAL

Nepal is not named in any of the main BBC Records sources that we have used.

We became aware of potential screenings in Nepal on this FORUM POSTING: "I have a friend who grew up in Nepal who said he watched black and white Dr. Who episodes in the early 1990s…", which is all we have to go on. 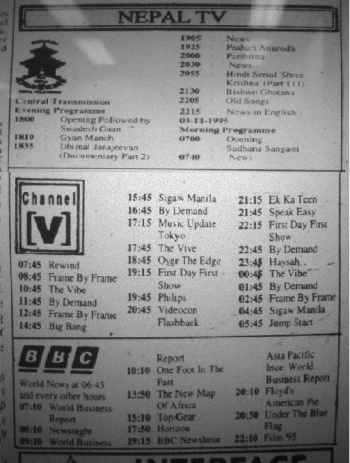 Generic listing from Rising Nepal, November 1995; did Doctor Who air on a BBC satellite channel?

The majority of all television sets sold and owned in Nepal were black and white, so the reference to "black and white" episodes does not necessarily mean that TV25 screened William Hartnell or Patrick Troughton stories. In all likelihood, the episodes would have been the more widely-sold Tom Baker stories.

We have no information regarding what screened or when. With the station having launched in the mid-1980s, Doctor Who could have aired several years earlier than the cited "early 1990s".

The only Nepalese newspaper we have been able to access was The Rising Nepal from 1989 to 1996. The paper did publish comprehensive TV listings for Nepal TV plus numerous internal and external satellite and cable stations, such as Star Movies, STAR Plus and Channel V, but there were no listings for Doctor Who at all on any of them.

The paper did publish listings for a BBC channel screening drama as well as news and documentaries, which was probably the old BBC World Service Television Europe, which did periodically carry Doctor Who during the early 1990s, and which became BBC Prime in January 1995, and on which Doctor Who regularly aired during the 1990s.

It was probably this BBC channel that was the source of the episodes the viewer in Nepal had seen.