MALTA is a small island in the Mediterranean, off the southern tip of Sicily (Italy).

Malta began its television service in 1962.

At the time there was just one television station: The Malta Television Service Ltd (MTV) (channel 10) (aka TVM), a government-owned commercial broadcaster.

Doctor Who returned to Malta soon after the launch of PAL colour transmissions in 1978.

Due to its close proximity to Italy, viewers in Malta could also receive TV transmissions from RAI-TV.

The principal language of Malta is English, with Maltese and Italian recognised as second languages.

DOCTOR WHO IN MALTA

Malta was the 6th country to screen Doctor Who, and the second in Europe. (See Selling Doctor Who).

The first of the two Dalek movies played at the Gaiety Theatre from 16 April 1966. Coincidentally (?), The Dalek Invasion of Earth was showing on TV at the time.

Dr Who and the Daleks in cinemas, in April 1966

The Stanmark Productions Ltd advertisement from 1966, identifies Malta as one of sixteen countries screening Doctor Who by January 1966.

Malta is not included in the list of countries in The Making of Doctor Who 1972 Piccolo edition.

Malta is not named in The Seventies, although it should be.

The Eighties - THE LOST CHAPTERS records a sale of "(4)" stories (by 10 February 1987). As the airdates show, Malta screened four Jon Pertwee and four Tom Baker stories, so the 1987 document is only partially accurate.

Malta therefore bought the standard package GROUP A, B and C of the William Hartnell stories.

It's likely that Malta was the first country in the Bicycling Chains that covered the Mediterranean.

Malta therefore bought only a small number of the nine full colour PAL stories that the BBC still had on offer in 1979. These were supplied as PAL colour video tapes with English soundtracks. (Other countries to purchase the same set of four Pertwee serials were: Sierra Leone, Swaziland and Sri Lanka. Malta's tapes may have been supplied from Swaziland.)

The tapes of the four Tom Baker stories may have been supplied by Swaziland. 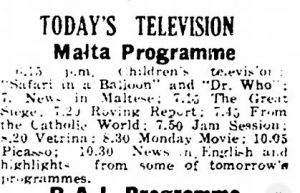 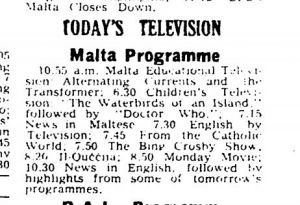 The series screened for 53 uninterrupted weeks until 23 May 1966. None of the listings gave story title, so it is assumed that the stories aired in the correct story order.

From 15 April 1966, while The Dalek Invasion of Earth was screening, the first of the two Peter Cushing / Daleks films was showing at the Gaiety Theatre (see above).

The first nine serials were likely sent to Cyprus; the series started there on 12 March 1966, only a week after The Reign of Terror part six had screened in Malta. Of particular note is that only serials A to H aired in Cyprus (with some of the films being recovered in 1984). If the other three serials weren't also sent to Cyprus (but did not screen), Malta therefore returned, retained, or destroyed the prints.

Eight years after the Hartnells aired (and five years before the series returned to MTV -- see below) residents of Malta could still enjoy the adventures of the Doctor in the form of the Target novelisations, which were available on the island from 1974 until at least 1983. The back covers of the following novels carry a price in Maltese currency: 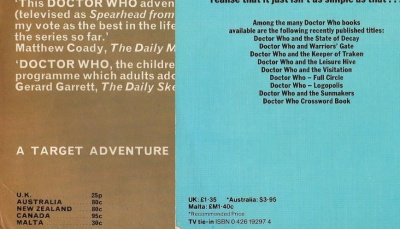 On Friday, 19 August 1977, The Times of Malta ran a full page feature about the series – some two years before it actually returned to the airwaves. The article – "DR WHO COULD BE MAKING HIS LAST TRIP IN 2011" – (see below) featured an interview with then-producer Philip Hinchcliffe, and made the interesting comment that given the Doctor has only thirteen lives, the series could come to a natural end in 2011! 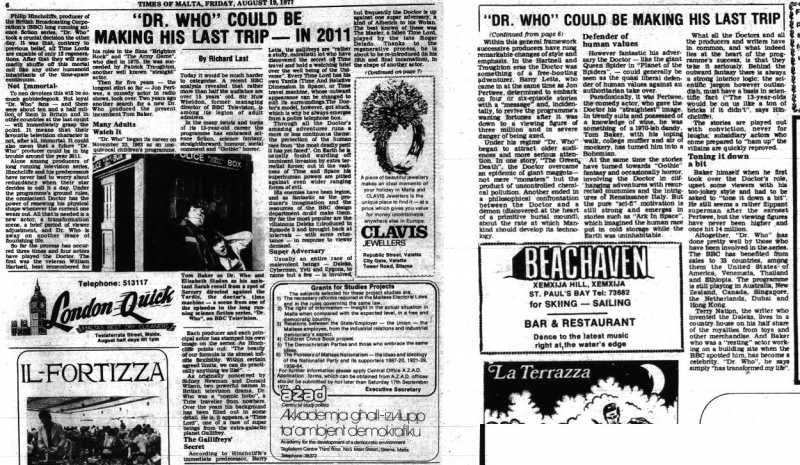 Thirteen years after the Hartnells had aired, two years after The Times of Malta article, and while the first ten or so Target books were on bookshop shelves, an 18-week run of Jon Pertwee stories in colour commenced on Friday, 20 April 1979, at 6.30pm, running until 17 August 1979. As noted above, Malta purchased only four of the nine available Pertwee stories that the BBC was selling in full colour.

The week after part six of The Monster of Peladon, Tom Baker's debut serial Robot aired, on 24 August 1979, at the usual time of 6.30pm. After a one week break on 21 September, the series continued for a further ten weeks, with the serials airing in production order.

The final episode of Revenge of the Cybermen aired on 30 November 1979; the newspaper said "(end of series)".

There is no clear record that Doctor Who aired in Malta again after 1979. However, viewers tuned into Italian station Rai could see dubbed Tom Baker episodes from 6 February 1980. 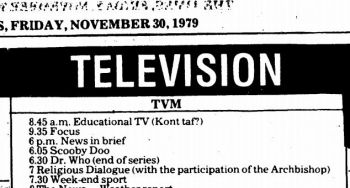 TV listings have been obtained from the newspapers The Times of Malta and Daily News.

The Times gave the title as either "Dr Who" or "Doctor Who". None of the Hartnell episodes titles were identified by title, so the order is assumed. The 24 May 1965 issue had a short preview, saying: "DR WHO: A new series of space adventures for children, starting on MTV today at 6.30pm".

While the main listings for the 1979 episodes did not have titles, the TV Highlights section in Daily News previewed and named each new story.

Malta in Doctor Who