Difference between revisions of "Luxembourg" 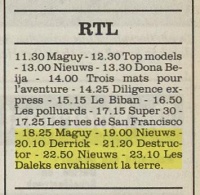 Although the regular series was not shown on any local terrestrial TV channels in LUXEMBOURG, viewers could watch Doctor Who by tuning into cable or terrestrial transmissions from the neighbouring countries Belgium, the Netherlands, France and Germany.

From 24 March 1987, the series was available to view on the UK satellite station Super Channel.

On 18 May 1990, the second of the two Peter Cushing Dalek movies was shown at 11.10pm on the local station RTL. (The French-owned distribution company StudioCanal (founded in 1988) had purchased the ownership rights to 'British Lion Films' back-catalogue, which included the two Cushing Dalek movies.)

The TV Movie was shown on RTL9 (the channel's new name) on Saturday, 27 February 1999 at 10.40pm. This screening was also available in other parts of Europe.