JORDAN is a land-locked country, bordered by Egypt and Saudi Arabia.

After the 1970 Jordan Civil War, the station was restructured, with both channels featuring a mix of Arabic, French, Hebrew and English programmes.

The Eighties - THE LOST CHAPTERS records a sale (by 10 February 1987) of "(4)" stories. These four do not include the Hartnells; most likely all are Tom Baker stories, however only three Baker stories are known to have screened on Jordan TV.

In 1992, researcher Richard Molesworth was informed by Jordan Radio and Television Corporation that they aired Robot, The Ark in Space and The Sontaran Experiment from 7 April to 9 June 1981, a run of ten weeks. 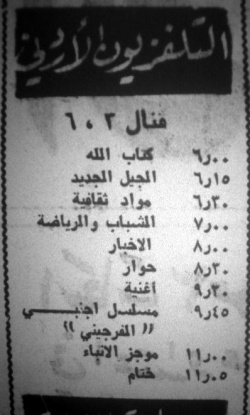 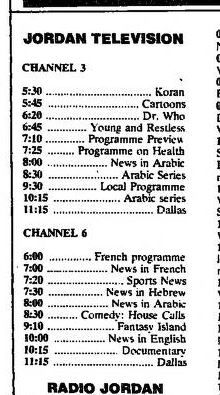 We have not been able to determine the airdates for these episodes, but based on BBC sales records, it was circa May 1969.

Doctor Who was shown on Jordan TV's channel 3. According to Molesworth's research, the first episode aired on Tuesday, 7 April 1981, however there was no listing for Doctor Who on that date. The following week did have "Dr Who" listed at 6.20pm. (The 7 April paper just had "Cartoons" listed from 5.45 to 6.35pm.)

There were only nine listings for "Dr Who", so presumably the first episode did indeed air on 7 April, possibly as a last minute replacement for the cartoons that were listed, or if it aired at 6pm, then it screened within the 50 minute "Cartoon" slot that was published.

The ten Tom Baker episodes were sent to Bahrain soon after transmission. And indeed, a longer run of twelve episodes aired on Bahrain TV, starting on 8 December 1981… (Presumably, Bahrain didn't air The Sontaran Experiment and aired another 4-parter that was sourced from elsewhere…)

The Tom Baker listings (all printed as "Dr Who") are from an online edition of Jordan Times; the dates correspond with those advised to Molesworth.

The TV listings did not have story titles. Foreign stations tended to show the serials in production code order, which means The Sontaran Experiment was usually shown before The Ark in Space, which may have also been the case here.

All of the April to June 1981 issues of the Israeli English newspaper Jerusalem Post have also been accessed. But they only had "Unofficial" listings for Jordan TV's channel 6 and not for channel 3, so Doctor Who was not included in those TV schedules.