Difference between revisions of "Ireland"

The island of IRELAND, to the west of Great Britain, is occupied by two political entities: Northern Ireland is part of the United Kingdom, while the Republic of Ireland is a separate governance. This profile is predominantly for the REPUBLIC OF IRELAND.

The Republic of Ireland commenced its television service in 1961. Viewers in certain areas of the country could watch Doctor Who broadcast signals from Northern Ireland, Wales, or the west of England during the 1960s, 1970s and 1980s.

From 24 March 1987, Ireland could watch the series on the UK satellite station Super Channel.

On 31 October 1996, TG4, an independent channel in the Republic of Ireland - catering for Irish-language speakers - was launched.

TG4 reached most of Ireland, parts of Northern Ireland and Wales. Doctor Who screened on TG4 from 1999.

Ireland's first commercial broadcaster, TV3 was launched on 20 September 1998. It was on this station that the 1996 TV Movie aired.

DOCTOR WHO IN IRELAND

As noted, Doctor Who has been available in Ireland since 1963; this profile is for the TG4 screenings only.

The first of the twoPeter Cushing Dalek movies, "Dr Who and the Daleks", was released in Ireland in December 1965. Both films were re-released as a double bill in 1969 , where they were sometimes listed as "The Double Dalek Show".

Three of the early Target novelisations published in 1976 had prices for EIRE printed on the back cover:

The Republic of Ireland is not named in any of our main BBC Records sources since the sale to Ireland occurred after 1987. 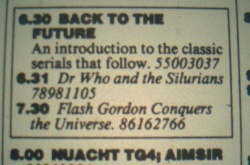 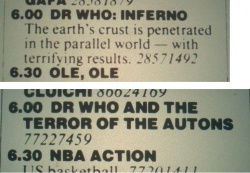 TG4 therefore bought all of GROUPs A and B, and all but one story from GROUP C of the Jon Pertwee stories. (It's not clear why The Time Monster was not included in this package; did TG4 want only 70 episodes rather than 76?)

For its run on TG4, Doctor Who was paired with the Buster Crabbe Flash Gordon Conquers the Universe serial; both were "introduced" with a short one-minute long preview, billed as BACK TO THE FUTURE in the newspaper.

The series commenced on Friday, 1 October 1999, at 7.01pm. Although the listings record the programme as ending at 7.35pm, it appears that Flash Gordon didn't air for the first two weeks, and that two episodes of Doctor Who aired back to back, filling the hour slot. But from 15 October, Doctor Who started at the earlier time of 6.31pm, and is billed as running for an hour, followed by Flash Gordon, which ended at 8.00pm.

The seventh episode of Inferno aired on its own on Wednesday, 29 December a week later than normal, due to the Christmas Eve TV schedules. The series moved to single episodes three days a week – Tuesdays to Thursdays – at 6.00pm with Terror of the Autons. For some odd reason, Day of the Daleks and The Daemons (which was the recoloured version) were swapped around.

Doctor Who and the Silurians, The Ambassadors of Death, Terror of the Autons, and The Mind of Evil all aired in black and white, despite a recoloured version of The Silurians being available.

For this repeat run, only the colour stories aired. With Colony in Space, the series moved to Saturdays and Sundays at 5.05pm, until the end of the run. As before, Day of the Daleks and The Daemons aired in the wrong order. (There was no episode on 9 July.) The series ended one day prematurely, on 16 September 2000; The Mutants part six did not screen.

All listings have been collated from online archived editions of Benjamin F Elliott's THIS WEEK IN DOCTOR WHO, and listings and billings verified in the Irish Times.

Ireland in Doctor Who

General references to Ireland, Northern Ireland or Republic of Ireland: