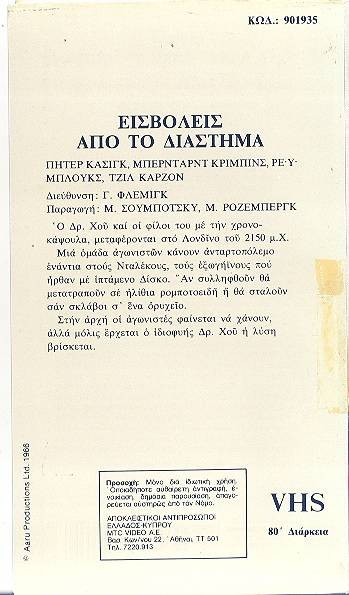 Back cover blurb for "Daleks Invasion" in Greek 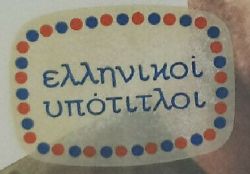 The second of the two Peter Cushing Dalek films may have been shown at cinemas in Greece in the late 1960s, since that had a far wider distribution across Europe than the first.

According to IMDB Here and Here, the two movies were also released on video in Greece under the following titles:

However, after a bit of digging, we found a VHS and Betamax listing for the second film only - HERE.

While many Greek VHS tapes have a translated title, this was not always the case for Thorn / EMI releases, which often retained the original English sleeve insert - but these sometimes have a sticker stating "ελληνικοί υπότιτλοι" ("Greek Subtitles") affixed to the front cover instead (although in the case of this particular image the sticker may have been removed).

So at a first glance, the front cover on the site appears to be that of the 1982 UK release - but it's the text on the back cover that displays its true origins - this gives the title, blurb and copyright notices in Greek.

The Greek title of the second Dalek film is ΕΙΣΒΟΛΕΙΣ ΑΠΟ ΤΟ ΔΙΑΣΤΗΜΑ (Invasions from Space / Invaders from Space), which is similar to but a couple of letters different from one recorded on IMDB, which would explain why none of those titles produced accurate search returns.

The subtitled film was released (circa 1985/86) on both VHS and Betamax by MTC Video A.E. most likely for the Rental market.

The boxed text at the foot states that MTC Video was "ΑΠΟΚΑΕΣΤΙΚΟΙ ΑΝΤΙΠΡΟΣΩΠΌ ΕΛΛΑΔΟΣ-ΚΥΠΡΟΥ", which is "EXCLUSIVE REPRESENTATIVES OF GREECE-CYPRUS" - which indicates the tape may have also been available in Cyprus.

And since there is no listing for the first film on that site, either by title or listed under actor Peter Cushing or director Gordon Flemyng, might we conclude there wasn't a Greek edition of that movie? 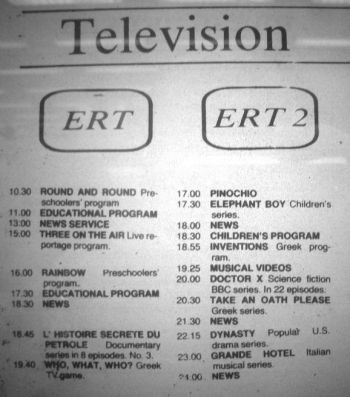 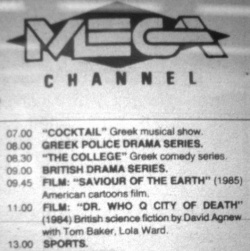 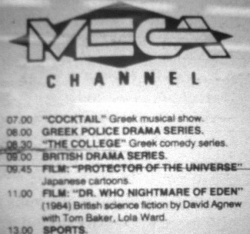 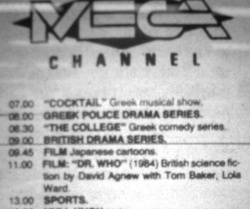