Ghana began its television service in 1954. In 1965 there was just one television station, Ghana Radio and Television Corporation (GTV). PAL colour transmissions began in 1980 using the PAL colour broadcast system.

In 1964/65, only one thousand televisions sets were registered for a population of more than seven million.

We are not sure exactly when Doctor Who commenced on GTV, but Ghana was – we think – the 19th country (the sixth in Africa) to broadcast Doctor Who (Selling Doctor Who)

Ghana therefore bought just the first Group of William Hartnell stories. (Canada and Bermuda were two other countries to screen but 'drop' the series after only the first five stories.)

The programme was supplied as 16mm black and white film prints.

It's likely that the prints were bicycled over from Nigeria, where the same five serials had aired between August 1965 and January 1966. 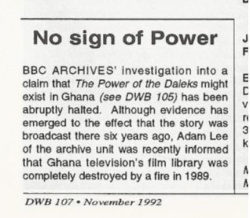 Although the report of the screening of that serial was later revealed to have been a hoax (the perpetrators had chosen Ghana as it was the most obscure place they could think of!), the fire that destroyed the film library was an actual event, and archival news footage of the 23 May 1989 tragedy can be seen HERE.

Due to inconsistent listings (see below), the first known Ghanaian airdate for Doctor Who was on Monday, 11 July 1966, at 9.30pm. The last listed episode was six weeks later, on 15 August 1966. Three of the other four known timeslots were 8.45pm.

BUT it is not known whether these dates are at the beginning, the middle or the end of the 26 episode run. If they were at the start, and the series aired without a break, then it ended in January 1967. If it is at the end of the run, then the series would have commenced in February 1966...

BBC Records indicate that Ghana bought all five serials by 26 January 1966, which certainly ties in with an early 1966 start.

None of the available 1965 and 1966 editions of the Ghana Radio & Television Times have listings for the series, so clearly it cannot have debuted until after April 1966.

Of particular note, the 26 April 1966 issue of the UK paper the Daily Mirror carries an interview with William Hartnell ("Oh, the Agony of being Dr Who"), in which it says "Canadians, Maltese and Ghanaians all send him fan-mail..." (See Peter Haining's Doctor Who – The Key to Time for the text from the Daily Mirror article; another version of the same article can be found on our profile page for Zambia.)

So, if fans in Ghana were writing to him as early as April 1966, then the series must have started between 25 March and 25 April. (But with registered television sets numbering only 1,000 in 1965, there could only have been a very small number of letters coming from Ghana!)

There is no clear indication that Ghana aired Doctor Who again, even after the introduction of PAL colour in 1980.

It's likely that Ghana sent the 26 films prints to Sierra Leone, where the series commenced from 12 April 1967.

On 23 May 1989, the Ghana Broadcasting Corporation's audio visual library was all but destroyed when a fire broke out. TV news coverage of the fire, and a video of the remains of the building shot 20 years later, can be seen here: GBC FIRE.

TV listings have been obtained from the newspaper Ghana Daily Graphic. For the five listings found, the programmes was billed as Dr Who or "Dr Who", complete with punctuation.

There were no TV listings available prior to July 1965. The newspaper did have TV listings from September 1965 to July 1966 but there was so sign of Doctor Who. There were, however, quite a few regular billings saying "To Be Announced", which could well have been Doctor Who, although with 26 episodes to air, how long would a TV station continue to be unsure of what they were screening each week?

From 22 August, TV listings disappeared completely for the rest of the year and into 1967.

Also checked were the available editions from 30 July 1965 to 25 March 1966 of the Ghana Radio & Television Times, but none contained listings for Doctor Who, so the earliest the series could have commenced is Monday, 28 March 1966.

We are therefore not sure whether these five listings are near the start or the middle of the full 26 episode run. Our Airdates table therefore reflects two options: the series starting in circa 28 March, placing the five known screenings mid-way; and a start in July 1966, with the run concluding circa January 1967.