Difference between revisions of "Denmark"

DENMARK is a constitutional monarchy located in north Europe, and bordered to the south by Germany.

The language of Denmark is Danish (Danske), however all foreign television programmes are broadcast with the original language soundtrack intact with Danish subtitles. For the Danish broadcasts of Doctor Who, Jan Grodin is credited with the TV listings as being the translator.

DOCTOR WHO IN DENMARK

Denmark was about the 49th country to screen Doctor Who; it was the third in Europe (see Selling Doctor Who). 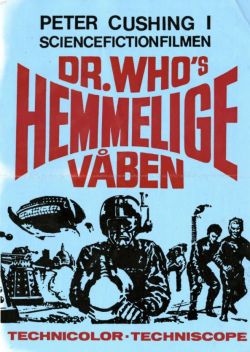 Danish movie poster (Thanks to The Space Museum)

The second of the two Peter Cushing Dalek movies was released in Danish cinemas on 10 May 1974. It was called "Dr Who's Hemmelige Våben", which translates as "Dr Who's Secret Weapon".

Sale of Doctor Who to Denmark reported in Daily Express, 9 June 1979

On 26 March 1968, the NZBC (New Zealand) sent the 16mm film prints of An Unearthly Child, The Daleks and Inside the Spaceship to Denmark. These must have been as Audition Prints (see Selling Doctor Who). However Denmark TV did not take up the offer to purchase the series at that time. (As to what then happened to those prints is anyone's guess...)

In DWM, Denmark is identified in just one story Archive: 4J. 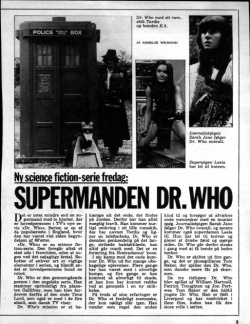 The programme was supplied as PAL colour video tapes with English soundtracks. Subtitles in Danish were superimposed for transmission.

The sale to Denmark was reported in the UK newspaper, Daily Express, the day after the first episode had aired.

The three stories were aired in three separate runs.

The first consisted of just Robot - translated as Robotten. The four episodes aired on Fridays (Fredag), starting on 8 June 1979 at 6.55pm.

The second story aired four months later, on 16 October 1979, this time screening four nights a week, Tuesday to Friday, also at 6.55pm. This was The Android Invasion - translated into De Fremmede, which means "The Strangers" or "The Aliens".

TV listings have been obtained from the Danish newspaper, Berlingske Tidende.

The first story is called Robot in the newspaper listings, but Robotten in other publications, such as the ones shown below.

The listings give the name of the writer ("Manuskript") and director ("Instruktion"), and that of the translator ("Danske tekster"): Jan Grodin.

In the synopses, the Tom Baker is the "Doktoren", "who moves freely in space and time".

Curiously, the "Manuskript" for Rum-Arken is credited to John Lucarotti, rather than Robert Holmes. (Holmes rewrote Lucarotti's original drafts.)

Although the above article, and those below, feature photographs of Louise Jameson (Leela), Mary Tamm (Romana) and K9, none of their stories screened in Denmark. The Doctor is cited as being a superman on the run from the evil Time Lords.

(Thanks to Steen and Henrik for clippings and other information.)

Denmark in Doctor Who