A brief series of Doctor Who was seen regionally in the former republic of Yugoslavia in 1986 and 1987 -- see that profile for further details.

In June 1991, CROATIA split from the federation and become an independent sovereign state. 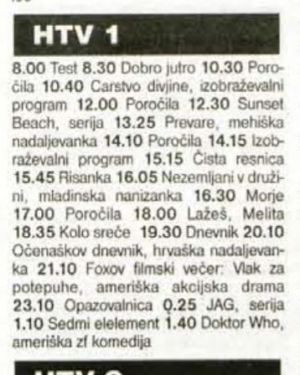 The Paul McGann TV Movie was shown on Croatian TV channel HRT1 aka HTV1 (based in Zagreb but available also in other former-Yugoslavian states such as Slovenia) on Saturday, 18 September 1999 at 1.40am! The title was "Doktor Who".

It's possible that the TV Movie was also released on VHS tape in Croatia (it was certainly issued on tape in Slovenia in 1996) but we have not been able to confirm this.

Classic Doctor Who was mentioned in this (now closed) Croatian website about the New Series - Do Croats ‘get’ the series?:

"The problem with the reception of Doctor Who in Croatia lies in the fact that it has been ‘marketed’ (and scheduled) as a show for kids, which – despite some episodes – it is not. On top of that, the gap between the airings of the original series (way back when) and the new is so large, the ‘new’ Doctor Who was completely lost on the generations that might have watched or have watched the ‘old’ series."

The New Series also has its own Croatian Facebook page:

Croatia in Doctor Who