COSTA RICA is located in Central America, between Nicaragua and Panama.


Costa Rica therefore bought GROUPs A to D of the standard package of Tom Baker stories. Time Life would have supplied the NTSC video tapes for El Doctor Misterio that had been dubbed (by them?) into Spanish.

The series ended on 30 July 1981. If our episode count is accurate, then this was midway through the second repeat of season 14.

After only ten episodes, the series took another break during the whole of December 1982, and returned on Monday, 3 January 1983, still at 1.00pm. It aired for 54 episodes before stopping on 18 March. During February 1983, the second repeat run ended, and the series recycled again for a fourth run.

The next billed episode is Monday, 4 July 1983, at 10.30am, again five days a week. However, the TV listings from March to July 1983, and from 18 July onwards are inconsistent with their television coverage – Dr Misterio aired at 10.30am, but TV listings in the paper often started from noon, so the early morning listings are unknown.

If the series aired uninterrupted and completed its fourth cycling through the 98 episodes, then the 392th episode aired around October 1983. But no further listings for Dr Misterio were found to the end of 1983. 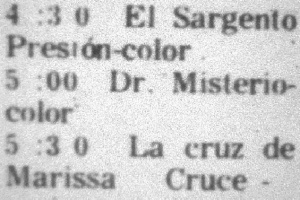 TV listings have been obtained from the Costa Rican newspaper La Prensa Libre.

The name of the series was generally given as "El Dr Misterio" or just "Dr Misterio". Some listings also added that it was in "color".

The listing for 4 March 1980, however, did erroneously say the series was El Sr Misterio.

On 11 September 1980, there was no billing for El Dr Misterio; however Superamigos (Superfriends), the half-hour cartoon that played earlier was given the timeslot 4.30 to 5.30, rather than its usual time of 4.30 to 5.00, so this can be taken to be a typo, and the scheduled episode of Dr Misterio aired at the usual time. A similar error happened on 21 November – Dr Misterio was not listed, but Superamigos was billed for 4.40 to 5.30 rather than 4.35 to 5.00.