By the early 1970s, there were five television broadcasters.

Dr Misterio aired on Televisora de Costa Rica – Canal 7 in the 1970s, and on Corporation Costarricense de Televisión – Canal 6 in the 1980s.

In Latin America countries, Doctor Who was known as Dr Misterio.

Costa Rica was the approximately the 33rd country to screen Doctor Who.

A BBC memo dated 10 December 1973 lists Costa Rica as receiving prints dubbed into Spanish of serials A, B, C, E, F, G, J, L, N, Q and R. Interestingly, the country is not named in any other documentation covering sales of William Hartnell stories, and yet the series aired there in 1971. (The existing sales documentation does record two sales of the same stories to Chile: could it be that the "second" sale was actually to Costa Rica?)

In The Eighties - THE LOST CHAPTERS, records a sale of "(1)" story to Costa Rica (by 10 February 1987). However, this figure cannot be accurate, as the TV listings summaries clearly illustrate many more stories were purchased by Costa Rica. (Unless one story was repeated over 80 times?!)

Costa Rica is not named in any of the DWM story Archives.

Costa Rica therefore bought the standard package of GROUP A, B, C and D of the William Hartnell stories dubbed into Spanish.

The sale to Costa Rica may even have been handled through Time-Life Films. Was it the successful sale of the Hartnells to Costa Rica that sealed the deal between the BBC and Time-Life for the sale of the Jon Pertwee stories into US syndication a year later?

The prints would most likely have been supplied by Chile, where the series had concluded in March 1970. (If the sale to Dominican Republic had been "cancelled" after receipt of the films, then the prints supplied to Costa Rica may have come via that Caribbean country…)

Costa Rica therefore bought GROUPs A to D of the standard package of Tom Baker stories. Time-Life would have supplied the NTSC video tapes for El Doctor Misterio that had been dubbed into Spanish. (Mexico, Chile and Nicaragua also played the series at this time.)

According to this blog DR MISTERIO, a series of Tom Baker stories aired in 1978-1979, however the years that are cited are incorrect.

And this blogger: DR MISTERIO, says the series aired on channel 7, where in actual fact it was on channel 6. (It was the earlier William Hartnells that had aired on Canal 7.) They also suggest that the series was brought to Costa Rica by ITC, which does not seem likely as ITC did not distribute BBC programmes. 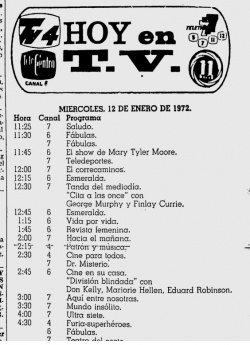 There were no listings for Canal 7 on 7 September 1971; if the series didn't air that week, that "break" does fall between Inside the Spaceship and The Keys of Marinus.

From 5 October, the time slot shifted to the earlier 3.30pm. Assuming the stories aired in the correct order, this was part-way through The Keys of Marinus.

From 12 January 1972, the day moved to Tuesdays at the even earlier time of 2.30pm. (Again, assuming the stories aired in the correct order, this change occurred with part two of Planet of Giants.) The series remained in that slot until the final episode, which aired Tuesday, 5 July 1972.

Although there were several newspapers missing from the archived files, and there were no listings for Canal 7 in the 7 September 1971 issue, the date range covered by the first and last billing accounts for all 56 episodes. If an episode did air on 7 September, then it's likely that one was pre-empted on one of the "missing" dates.

We did check papers after 1972 in case the series was repeated at a later date, but did not spot any further listings.

It's possible that the Spanish prints held by the BBC in the late 1970s were returned from Costa Rica after 1972... 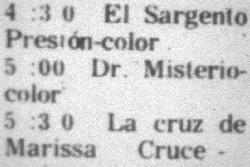 TV listings have been obtained from hard copies as well as those archived online of the Costa Rican newspapers La Prensa Libre and La Nación.

The name of the series was generally given in both as "El Dr Misterio" or just "Dr Misterio". In the 1980s, some Prensa listings also added that it was in "color".

On 11 September 1980, there was no billing in Prensa for El Dr Misterio; however Superamigos (Superfriends), the half-hour cartoon that played earlier was given the timeslot 4.30 to 5.30, rather than its usual time of 4.30 to 5.00, so this can be taken to be a typo, and the scheduled episode of Dr Misterio aired at the usual time. A similar error happened on 21 November – Dr Misterio was not listed, but Superamigos was billed for 4.40 to 5.30 rather than 4.35 to 5.00. (The corresponding issues of La Nación were missing.)