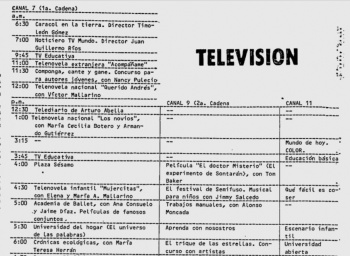 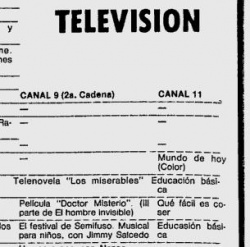 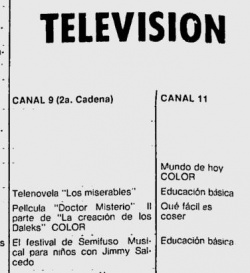 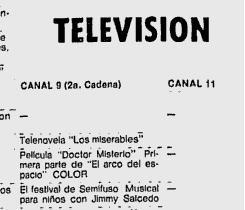 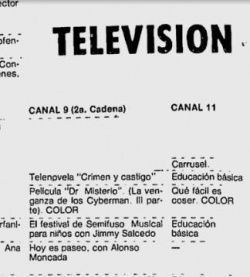 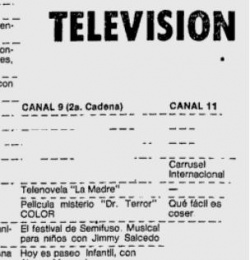 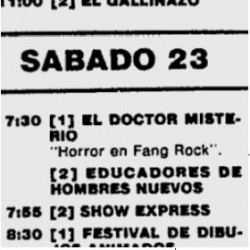 Horror of Fang Rock, 23 May 1987. Note the hour-long timeslot – but we think this is a misprint

It is not known when the new run started. The 7.30-8.30am timeslot was occupied by "Tierra de Gigantes" (presumably Irwin Allen's series Land of the Giants) from mid/late 1986 through until at least 4 April 1987, which was its last clear billing. The papers for the next four weeks, 11 April to 2 May, were missing, so it is not certain when Land of the Giants ended and Doctor Who started.

The 23 May 1987 billing was the only one to give a name - Horror of Fang Rock - and the timeslot given for that was 7.30 to 8.30am. Was this an indication of two episodes back to back or merely a printing error? Since there can't be an odd number of episodes, if Doctor Who started on 11 April, there would have to be two episodes on 23 May, making the potential for three 4-parters in this short run. If 23 May was only one episode, then the series could have started on 18 April, giving us one 2-parter and two 4-parters. Or, if there were two episodes on 23 May, the series could have started 25 April, again, giving us one 2-parter and two 4-parters. If the series didn't start until 2 May, and only episode was on 23 May, we get only two 4-parters for the run.

(It would probably have been these 1987 Saturday morning screenings that the FORUM poster remembered seeing, but had dated as being in 1981; however he is mistaken in there also being episodes on Sunday mornings.)

This short run concluded on 20 June 1987; the final 4–parter is not identified. The FORUM poster remembers seeing Peter Davison stories in 1984; maybe he has the year wrong, and it was in 1987? If so, this would mean that at least one of the (two or three) stories in 1987 could have been with Peter Davison. (The Visitation was the only Davison to air in the Seychelles in 1987; could the other 4-parter have been that story?)

All the available archived papers from 1978 to the end of 1988 were accessed, but apart from the 38 episodes in 1980 and the few in 1987, there were no further listings for the series.

(NOTE: Most of the newspapers for the first third of 1981 were not available, but for the ones that were held, there were no billings for the series on weekends; if any episodes did screen on weekends for the first four months of 1981, as stated by the FORUM poster, there are only enough airdates to cover no more than 32 of the remaining unaccounted for 60 Baker episodes. If omnibus editions aired, such as was the case in Chile in 1980, it is only just possible for 14 serials to air, two per week, squeezed into the period not covered by papers.)