DOCTOR WHO IN CHINA

NOTE: This Profile is for mainland CHINA only - refer to our separate profiles for Hong Kong and Taiwan. 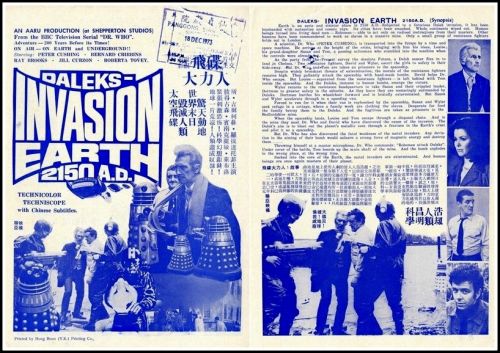 The two Peter Cushing films were played in theatres in the late 1960s, although exact dates and locations are not known.

This advertising brochure [at right] for the second of the two - Daleks Invasion Earth 2150 AD - was printed by the Hong Boon (Y.K.) Printing Co, which was based in Singapore.

The large text on the poster reads 飛碟 大力人, which roughly translates as "UFO Hercules". This is either the title of the film, or merely a descriptive tagline.

(The stamp at the top right of the front page bears the words "院 戲 水 仙" and the name: PANGGONG SIAN CHOOI SUNGAI KURAU. The Sian Chooi was a cinema in Kuala Kurau, in the region of Sungai, western Malaysia. The date on the stamp is 18 DEC 1973 (a Tuesday). This brochure was therefore printed in Singapore predominantly for cinemas in China but later used in Malaysia.)

The first film was also released on home formats, apparently under the title 怪博士天外降魔 (which translates as "The Doctor is to Blame"!). The sequel was released as 飞碟大力人达莱克斯入侵地球 (which is "UFO Hercules: Daleks Invade Earth").

The Paul McGann TV Movie was released in China on laser-disc, under the title "時空謀殺案" - which translates as "Murder in Time and Space". It is believed that the laser-disc and DVD (which may actually have been an illegal bootleg transfer of the laser-disc) were available only in Hong Kong rather than mainland China. (These releases also included Japanese subtitling as an option.)

In early 2011, the Chinese government banned time travel themed films, TV and books, citing that the genre disrespected history. The ban must have been lifted by 2017...

The New Series (2005 to date) finally debuted there in 2018 on the Tencent Video streaming site (腾讯视频) (subtitled) and on YouKu, the Chinese equivalent of YouTube:

The modern Doctor Who is known as 神秘博士 (pronounced Shenmi Boshi, which translates as "The Mysterious Doctor" / "Mystery Doctor").

In more recent years, translations of Doctor Who reference books and novels have been available in China.

The large format 2013 50th anniversary book Doctor Who The Vault by Marcus Hearn, was published in a Chinese edition, under the title 神秘博士 珍宝书 (which can be translated as "Doctor Who Treasure Book"); the sub-heading （50周年官方纪念版） is "(50 Years Official Memorial Edition)".

The reference work Who-Ology: The Official Miscellany was released as 神秘博士学 - which means "Mysterious Doctorate".

The novelisations of two Classic serials were available:

A number of the original fiction novels based on the New Series featuring the ninth through thirteenth Doctors (published by BBC Books over the years) have a Chinese edition.

And other books featuring Classic and new Doctors include the short story omnibus 神秘博士：12位博士，12个故事, which is the 2013 12 Doctors, 12 Stories anthology.

Another Chinese publication was BBC Knowledge, which carried a 50th anniversary article: 知识家：神秘博士的炫酷科学 Doctor Who 50周年 (The Cool Science of Doctor Who), which had been originally appeared in BBC Focus Science and Technology magazine. 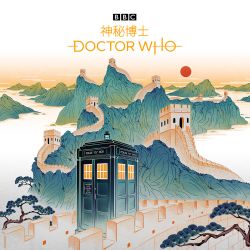 One of the Feifei Ruan prints

A series of seven art prints, depicting the TARDIS landing at iconic landmarks of famous cities in China, were created by Feifei Ruan, and made available to purchase.

China in Doctor Who