The reason why a single Tom Baker serial was purchased by SPACE, was because they had contracted to buy 130 episodes (which, if stripped five days a week, provided an industry standard run of 26 weeks). However, when the station discovered that the 129th and 130th episodes would be parts one and two of the seven-parter Inferno, they instead acquired this two-parter to make up the 130 episodes they had paid for.

We're not sure of the exact date on which the series commenced, but based on the dates we do know, the first episode of An Unearthly Child screened (probably) on Monday, 20 October 1997, three days after SPACE went live. Initially, each episode aired weekdays, with three screenings per day: 7.30am, 1.30pm, and again at 7.00pm. (We've put only the 7.30am slot in the Airdates table.)

Episodes were broadcast commercial-free, but with a semi-obtrusive station ident logo at the bottom corner.

The series did not perform as expected, with the result that the 7.00pm evening screening was dropped, and the third screening was pushed back to 3.30am of the following morning!

From Sunday, 11 January 1998, a separate repeat cycle was added to the schedules. Starting at the beginning again with An Unearthly Child, the fresh run aired on Sundays at 8.00am, with a repeat of the same episode at 3.30am Monday morning. The 8.00am screenings stopped on 24 January 1999 (with The Chase part one); from that date only the 3.30am repeats continued. Those repeats stopped on 5 April, with a one-off screening of The Space Museum part one. 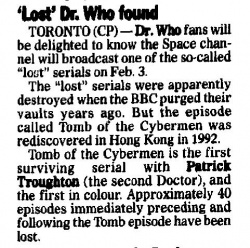 The Tomb of the Cybermen, 3 February 1998 on SPACE (Winnipeg Free Press)

The "lost" Patrick Troughton serial The Tomb of the Cybermen had its Canadian television debut in February 1998, a fact that was mentioned in the Winnipeg Free Press. (This screening was potentially also the first television screening of the serial since its recovery in 1991/92.)

And the single Tom Baker serial, The Sontaran Experiment, the last serial of the 130-episode package, aired 16-17 April 1998.

The following week, the station went back to the beginning, and started a second run of repeats, from An Unearthly Child part one. (The Sunday/Monday repeats stream was up to The Keys of Marinus at this time.)

One curious side-effect of there being a stream of weekday repeats as well as a separate Sunday/Monday stream, was that for one week in May 1998, the two streams overlapped, so that part five of The Keys of Marinus aired three times that week! And later that year on 27-28 December 1998, part one of The Space Museum screened three times!

And from that point on, episodes now aired seven days a week at 7.30am, a regular schedule that continued right through until the final episode was aired by SPACE on Friday, 10 March 2000.

In two and a half years, the package of 130 episodes had been cycled through six times. Adding in the discontinued Sunday/Monday repeats, some of the Hartnell serials also played for a seventh time.

This was the final screening of Doctor Who on SPACE until the debut of the new series in 2005...

Our Airdates table as been extrapolated from archived editions of Benjamin J Elliot's on-going This Week In Doctor Who.