Difference between revisions of "Brazil"

BRAZIL is the largest country of the South American continent. It shares a border with Venezuela, Colombia, Peru, Bolivia, Paraguay, Uruguay and Argentina.

Brazil began its television service in 1950.

Brazil's two main television networks are based in Sao Paulo and Rio de Janeiro. But due to its vast size, Brazil is also served by a number of privately-owned stations, with very limited areas of coverage.

By 1976, for instance, there were 70 TV stations operating, all of them were leased out on 10-yearly franchises to private enterprise by the government. Fewer than 50 of them were independents, and the rest were controlled by big corporations.

TV Globo was the first to introduce PAL colour. Limited broadcasts began in 1972. It wasn't until 1978 that colour transmissions on that station were full-time.

DOCTOR WHO IN BRAZIL (DOUTOR WHO)

Although some BBC Records indicate that Doctor Who / Doutor Who (as it would have been in Portuguese) was at least cleared for screening on TV in Brazil, there is no clear evidence that the series was ever broadcast.

But as noted in the various sub-sections below (placed in chronological order), Doctor Who was mostly an unknown entity in Brazil...

From an historical perspective, one of the first references to Doctor Who in Brazil was in the 14 November 1965 edition of Folha de Sao Paulo, which carried a short piece about "Dr Who" on its front page. The article and photo (provided by the UK's Daily Mirror), introduced the bald "Teknix" from The Daleks' Master Plan, which was being recorded at the time.

The caption to the photo translates as:

These six young people were happy to appear bald on television. When they are seen in the video series entitled "Dr Who" and broadcast on BBC London, they do not seem so amused. The six will be the new allies of the enemies of the famous "Dr Who", the Daleks. They are the Teknix, a race of bald super brains living in the year 4000. Their objective to destroy the world. From top to bottom, in the picture [names of the actors].

But as noted in the various sub-sections below, Doctor Who was mostly an unknown entity in Brazil...

No listings for the first Dalek movie could be found; it was therefore not seen in theatres in Brazil. The second film was however released, and was shown under the title "Ano 2150 A Invasão da Terra". This was subtitled with Brazilian Portuguese.

The earliest showing of this film that we could find for Rio de Janeiro was on 23 September 1970. It was played at various cinemas through until mid-October 1970, several times per day -- see clipping. It was shown again in regional theatres from October to November 1974.

The film debuted in Sao Paulo on 28 December 1970 (the Folha de Sao Paulo for 27 December had a print ad (see below) announcing the film's commencement "AMANHA" (Tomorrow) and the following day a similar ad appeared declaring the film started "HOJE" (Today).

The film played at the Art Palacio and other local cinemas through until early 1971. It made an appearance in smaller regional theatres towards the end of the year, then again in 1973, 1974, 1976, and in April 1978.

The first film debuted on Brazilian TV, and was shown a number of times during the 1980s and 90s. Like all television, this was now dubbed into Brazilian Portuguese.

We could find no billings for the second film, so it looks like it was never shown on TV in Brazil.

Both films - this time subtitled rather than dubbed - were released together in a DVD box set by Dark Side. The first film was given the slightly expanded title of "Dr Who e a Guerra dos Daleks" on the box cover.

Doctor Who on TV?

In a BBC memo dated 8 December 1965, the sales section of BBC Enterprises reported that "[we] do have audition prints in Brazil but have not, as yet, a concrete offer for the series". At that time, Brazil had many TV stations operating, so it's unknown to which this (ultimately unsuccessful) offer had been made.

In DWM, Brazil is identified in 20 story Archives, all of them Tom Baker stories from his first four seasons: Robot to The Invasion of Time, with the exception of three - 4C, 4L, 4S - which is probably due to the original BBC documentation being incomplete rather than an indication that these three didn't air (the same three Archives also omit Guatemala). The year of sale recorded in the BBC document that was the source of this information -- mainly clearances issued for Dudley Simpson's incidental music -- is given as March 1979.

From this, Brazil appears to have bought and screened the standard package of Tom Baker stories that was offered to the United States, Central Amercia and South America.

In fact, the US distributor, Time-Life Films / Television, was itself instrumental in the establishment of Brazil's largest broadcaster, Rede Globo (aka TV Globo) (Canal 4), a partnership which ended in 1968. Although Time-Life was the main distributor to Spanish South America, it's not clear whether they still had any influence within Brazil in the late 1970s; the package of tapes that Time-Life had on offer were in NTSC and dubbed into Spanish, but in Brazil, television broadcasts are in the PAL colour format, and dubbed into Portuguese.

However, a number of Brazilian newspapers from 1978 to the 1990s (in print as well as online) have been accessed, but no listings for Doctor Who (or Doutor Who) as an on-going series have been found.

If the series did play, it would be expected to have aired in the two largest cities, Rio de Janeiro and Sao Paulo, and yet no listings can be found in the newspapers published in either city.

Of course, as previously stated, given the dozens of small independent stations broadcasting throughout the country, not all stations had listings coverage in the major newspapers, so we have yet to identify whether, when and where the series may have aired.

There is also the possibility that the series was given a different title, and it wasn't known as Doctor Who or Doutor Who or Senhor do Tempo. But even if that were the case, OCR searches for terms such as "Tom Baker", "Elisabeth Sladen", "Dalek", BBC TV failed to return any matches.

According to the following Brazilian forums and websites, the posters are at least certain that the series never aired in Brazil prior to 2005. (But as we've noted above, the series may have aired on one of the minor private channels, and therefore completely escaped everyone's attention...)

and which translates as:

"The show became very popular in the UK and some other countries like Japan and Korea. In the States, it has a small fan base. In Brazil, it only aired on cable channel: PEOPLE + ARTS, but that was the new seasons from 2005 to now. The classic series never happened here ... unfortunately we are accustomed to canned Americans."

With the success of the series, they made two films feature films with the Doctor: "Dr Who and the Daleks" (1965) and "Daleks - Invasion Earth 2150AD" (1966). These two movies are rare these days but, unlike the series, came to be broadcast on Brazilian TV at some obscure point between 1960 and the first half of the 1970s. Also Doctor Who was probably "too English" to have any success out of England but has been successful in some countries like Japan, for example.

"If we put into a scale of real time how many years we were without the pleasure of seeing the Dr. Who series, created by Sydney Newman in 1963 for the BBC and one of the great classics of science fiction on TV, the Time Lord's adventures took more than 50 years to be transmitted on TV in Brazil, especially if we consider that the character came to video only in 1988 in the double episode Robots of Destruction [sic], launched on rare VHS by VTI."

(Note: the title of the VHS tape was actually Os Robôs Da Morte - see below)

And if these people who live in Brazil claim that Doctor Who never screened there, who are we to disagree with them? So, while some obscure BBC records may record that Doctor Who was at least offered to Brazil, that's not the same as confirming that a sale and broadcast ever went ahead. Other extant BBC records do record when sales to other countries were subsequently "CANCELLED". This could very well be the case with Brazil. 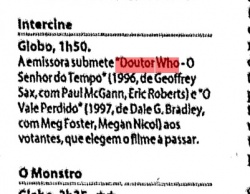 The movie was dubbed into Brazilian Portuguese by Dublavídeo, and distributed by Look Filmes Distribuidora Ltda, two companies based in São Paulo. The actors providing the voices were:

For the Brazilian-Portuguese dub, the TARDIS becomes "O TEDRINE" (a masculine noun), which stands for "Tempo E Dimensões Relativas No Espaço".

The full dubbed movie is available to view here:

Even if the TV series didn't reach Brazilian TV screens during the 1970s, the series was at least known to those who read the one-off Target adaptation by Terrance Dicks that was translated into Brazilian Portuguese by Márcio Pugliesi and Norberto de Paula Lima, and published in mid-1975 by Global Editoria. The cover art is signed by "Darlon":

(The 20 June 1975 edition of the newspaper Folha de Sao Paulo published a review of the novelisation: "VIAGEM NO TIEMPO" translates as "Travel in Time").

A footnote on page 21 of this says that "Doctor Who and the Doomsday Weapon" was "a sair brevemente nesta série" ("coming out soon in this series"), however it would appear that no further translations from Global were ever published.

Another set of novelisations translated into Portuguese was published in Portugal in 1982-83; some of these may have also been available in Brazil. 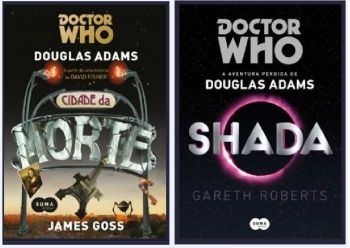 In the 2010s, two novelisations based on Douglas Adams scripts were published by Suma:

Also published in Brazil have been translations of various Titan comic collections, and original novels based on the New Series.

At least two video tapes were available in Brazil:

Other Classic serials were later released in Brazil on DVD in 2016. These were the six Monster Collection boxsets (A Coleção dos Montros), which paired one classic serial with one New Series story by theme. The six box sets (subtitled) were:

And as noted above the two Peter Cushing / Dalek films were also released in a DVD box set.

Brazil in Doctor Who