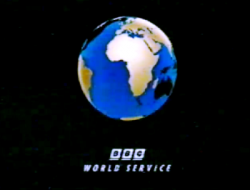 This cable and satellite channel was launched in 1987 as BBC TV Europe, serving most of western continental Europe, including the islands in the Mediterranean sea, such as Malta.

From November 1991 it expanded its coverage to Asia, which received different programming from that seen in Europe.

On 26 January 1995, the channel split into BBC World (for news) and BBC Prime (for entertainment) -- see our dedicated page to that re-branded channel.

DOCTOR WHO ON BBC WORLD SERVICE 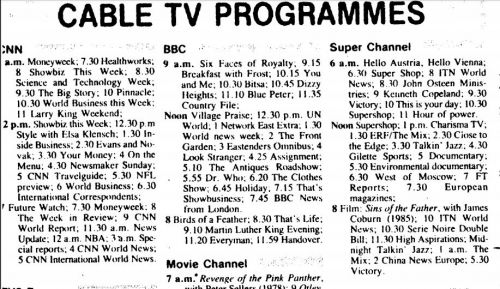 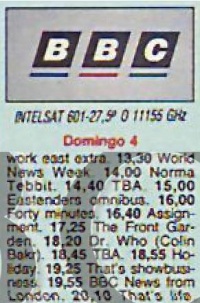 Same 4 April 1993 listing from a Spanish newspaper, albeit with some of the listings times printed incorrectly! - "Dr Who (Colin Baker)" at the incorrect time of 6.20pm

The Doctor Who repeats that aired on BBC2 in 1992, 1993 and 1994 were delay broadcast a few days later on the satellite channel -- see our BBC 2 repeats page for the stories that were repeated.