Difference between revisions of "BBC Sydney"

The BBC also struck up a relationship with Time-Life Films (later Time-Life Television) in the United States to handle distribution within the United States, Latin America (specifically in Central America and South America). Time-Life's contract expired in March 1981; after that date the BBC's new partner and distributor was Lionheart Television International Inc, of which the BBC bought full ownership in early 1986. From the Lionheart offices in the US, the BBC sold copies of the US/NTSC tapes to other countries around the world.

During the mid-1960s, sales to some countries in the Caribbean, Africa and Middle East were facilitated by Television International Enterprises Ltd's subsidiary, TIE (Programmes) Limited. 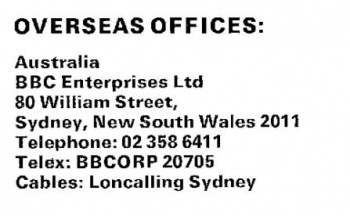 The BBC's office in Sydney was located at several different locations over the years.

In the 1960s, the BBC was at 177 Elizabeth Street, Sydney (one block away from the ABC's own headquarters) until 1974, when it relocated to the Westfield Towers at 100 William Street. In the 1990s, it was based next door at 80 William Street.

The basic sales process at the BBC in Sydney was this:

Customers would often want to preview a programme before they made a firm commitment to purchase, so BBC Sydney would send them "Audition Prints" (aka Viewing Prints) which they acquired from London. (See Australia Sales for more on this.)

Another source of "Audition Prints" was other foreign broadcasters, who would be instructed to send to another country a couple of the prints they had already aired.

Once a foreign broadcaster had committed to a purchase, BBC Sydney handled the contracts and other paperwork, and also assisted in arranging supply of the film prints and tapes. These copies either came from BBC in London, or were bicycled in from other broadcasters.

AS EASY AS ABC

Of the Australian broadcasters, the non-commercial ABC (Australian Broadcasting Commission / Corporation) was the single biggest purchaser of BBC programmes in the world. The ABC operated a base station in each of the eight states / territories, which meant that films had to be regularly transported across the country.

The BBC valued the ABC as a customer, and as such, the ABC often had first refusal to purchase all BBC material ahead of the other Australian networks. But this meant that the ABC paid a hefty price for this privilege, usually paying (in pre-decimal currency days) hundreds of pounds for each episode, whereas other countries – such as New Zealand – paid only a tenth of that.

The ABC did not commence colour broadcasts until March 1975. However, for at least two years in advance of this date, the ABC acquired colour copies of some programmes, which were placed into storage to await scheduling after colour was launched. 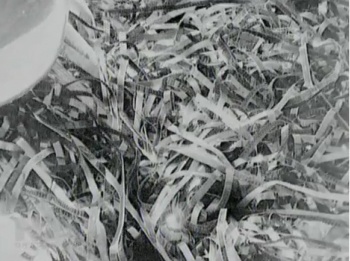 After they had passed their "use-by-date", the films and tapes used by Australian broadcasters were usually destroyed or sent back to the original distributors. After contacting BBC in London for disposal instructions, BBC Sydney would either arrange to have the films destroyed locally (usually by incineration), or send them back to London, but only if Enterprises wanted them back for selling elsewhere.

Ex-ABC prints from The Chase, The War Machines and The Faceless Ones that had been junked were acquired by a film collector circa 1970, and subsequently returned to the BBC in the 1980s.

All films acquired by the ABC were held at the Federal Film Library, before screening and returned to afterwards. It was at this facility that The Celestial Toymaker part four was recovered in 1984. (See the profile on that serial for more thoughts on the origin of that particular 'missing' print.)